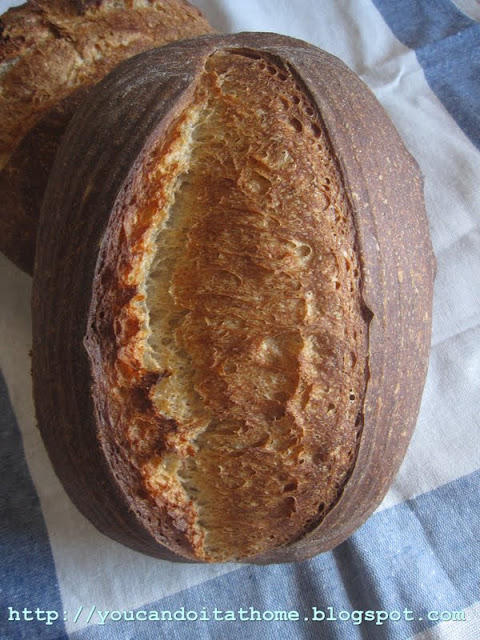 Vermont sourdough is one of my favourite bread. It is a flavourful plain sourdough made with wheat and rye flour. It is one of the most loved bread by many, especially among the artisan bread making community. I heard about the bread and its rave reviews before I bought Bread cookbook by Jeffrey Hamelman. As soon as I got the book, it was the first recipe I jumped to make.
I made both Vermont Sourdough and Vermont Sourdough with Whole Wheat several times in the past year but this was the first time I attempted this recipe (Vermont Sourdough with Increased Whole Grain).
There were serious typos in the formula for home-bake. Mixing the dough by following the ingredient list, I ended up with a pancake batter. I have heard about the big errata sheet for the book, but this was the first time I came across the recipe error myself. Thank God that at least there was no typo in Baker’s Percentage and liquid levain built. At least, I prepared starter built correctly and I corrected the ingredient errors by using the Baker’s Percentage.

The recipe called for whole rye flour, which I didn’t have on hand. I used rye flour instead, which I wasn’t sure whether it was medium or light or what type of rye. The only rye flour I had access to, was labelled as ‘rye flour’, with no specific information about its type (From my quick search, whole rye flour is what whole wheat flour to bread flour).
Thanks to my new baking stone, The loaves came out singing loudly. I always thought my loaves were okay and had crackling crust and all. But I just understood what it meant when the loaves sang now. The crust kept crackling and making noises for few minutes out of the oven. It sounded like something was shrinking and was going to explode.
Comparing this recipe to Vermont Sourdough, it has slightly more rye flour and higher percentage of starter, which enhanced the bread flavour (it produced bread with more pronounced sourness). It made great everyday kind of bread and was now in my favourite list. 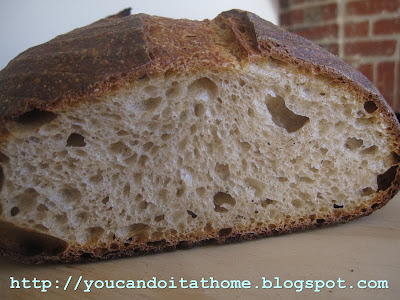 Side notes:
Now, it is in winter in Australia and temperature at night drops down to around 5 C (around 10 – 11 C in my house). In the past weeks, I have been retarding the bread at night and put them at the coldest part of the house where temperature was around 10C. I usually retard them before going to bread and bake them first thing in the morning (about 7 – 8 hours later).  I found that this worked out really well. Had I retarded them in the fridge as usual, the loaves would have needed more bench time to fully wake up to the ambient temperature and to get fully proofed.

In fact, Mr Hamelman also suggested that the loaves can be retarded at 10 C for up to 8 hours. 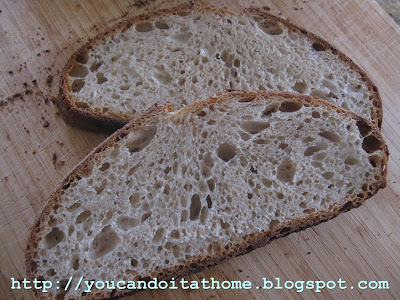 We bought a new stone weeks ago (bluestone for paving bought from Bunning). The stone is more than twice the thickness of my old pizza stones. It held and distributed the heat much better. As a result, the bread bottom became really brown, and bordering on being burnt (or shall I say, caramelised). It was slightly too brown to my liking, which I will have to adjust the oven temperature in the future.
I usually pre-heat the oven at 265C for an hour (using fan-assisted conventional mode). I also left the temperature at 265C for the first 5 minutes (which I will have to change this 250C, perhaps) and reduced it to 245C for another 10 minutes, followed by 235C for the rest of the bake. Next week, I’ll have to reduce baking temperature and adjusting the time. As much as I love crusty breads, my jaws started to complain for these extremely crusty loaves.
Vermont Sourdough with Increased Whole Grain
from Bread: A Baker's Book of Techniques and Recipes

Prepare sourdough built:  Mix all ingredient together until well-combined about 12 – 16 hours before mixing the final dough. Leave it in a covered container at room temperature. Desired temperature 21c (70F).

Mixing: Add all the ingredients to the mixing bowl, except salt.  Mix until the ingredients are incorporated. Leave it to autolyze in a bowl covered with plastic bag or wrap for 15 - 30 minutes. Desired dough temperature 24C (76F).
Sprinkle salt over the dough surface and mix on the first speed for 3 minutes. Continue mixing on second speed for further 3 – 4 minutes, until a medium gluten development is achieved (the dough can be stretched gently, stay in piece and doesn’t tear).

I kneaded the dough by hand and it took around 10 minutes to get medium gluten development.
Bulk fermentation: - Leave the dough in a lightly oiled container and cover the bowl with plastic bag or wrap for 2.5 hour until doubled in size. Do stretch-and-fold once after 45 minutes.
Divide the doughs into two equal portions. Pre-shape the doughs into rounds and let them rest for 10 – 15 minutes under a tea towel.
Shape the doughs into oblong (batard) or boule (round) and place into proofing baskets/bowls seam side up. Slip the proofing basket into a large plastic bag. Retard the dough in the fridge overnight or proof at room temperature for 2  hours or until almost double in size.
Note: I retard the dough at 10 C for 7 hours.
Baking: Preheat the oven to the highest temperature and prepare the oven steaming.

Bake at 235C for 40 – 45 minute (with steam for the first 15 minutes).
I usually leave the loaves to dry off in the off-oven with the door open for 5-10 minutes. This helps the crust to brown up a little more and stay crisp for longer.
For anyone who owns Hamelman’s Bread cookbook, you can download Errata Sheet at Mellowbakers.
Submitting this post to YeastSpotting.
Posted by Sue at 11:15 PM