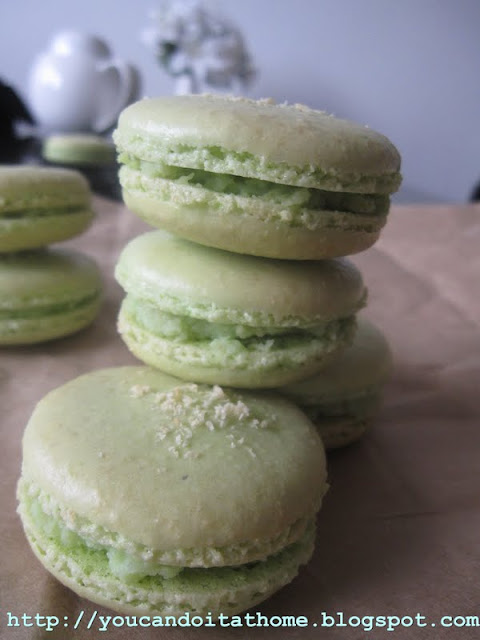 Pandan is a prominent feature in Asian dessert, especially for Southeast Asia region where I came from. Its use is similar to vanilla to western cooking, to flavour dessert and cakes. It is also used with meat and rice dishes (the popular chicken wrapped in pandan leaves, and rice cooked with pandan as examples).
Pandan leaves (Bai-toey inThai) is an upright green plant with fan-shaped sprays of long, narrow, bladelike leaves (source: wikipedia.com). It has fragrant, sweet and mellow aroma and usually available frozen at Asian grocery stores (or fresh if you live in Southeast Asia).
Pandan and coconut are classic food pairing in Asian dessert (like vanilla and milk/cream in western cuisine). It is used in cake, pudding, jelly, and many more. I wanted to try making Asian inspired macaron. Umm, sort of east meets west. Pandan and coconut was the first flavour that came to my mind.

I used pandan leaves (you can also used the pandan flavouring essence, available at Asian stores) to infuse the cream used in white chocolate ganache. I also included toasted desiccated coconuts in the ganache and macaron shell. I love toasted coconut. I think toasting them enhanced their flavour and delivered fantastic aroma. It made the cooking/baking even more enjoyable. 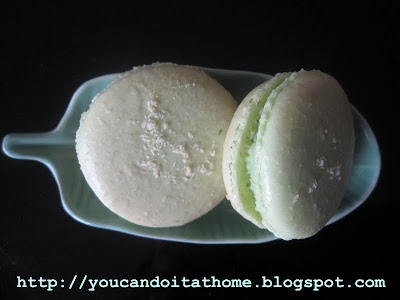 Macaron shells were a little chewier and stickier than usual which I believed resulted from desiccated coconut in the shell. The flavour was great. It was really aromatic with toasted coconut and pandan. The taste and aroma reminded me of my hometown. 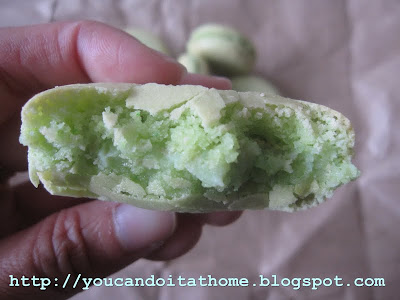 Making macarons shells
Roast desiccated coconut in the heavy-base pan over low-medium heat until they are slightly golden and aromatic. Regularly shake the pan to ensure that they are toasted evenly and not getting burnt. 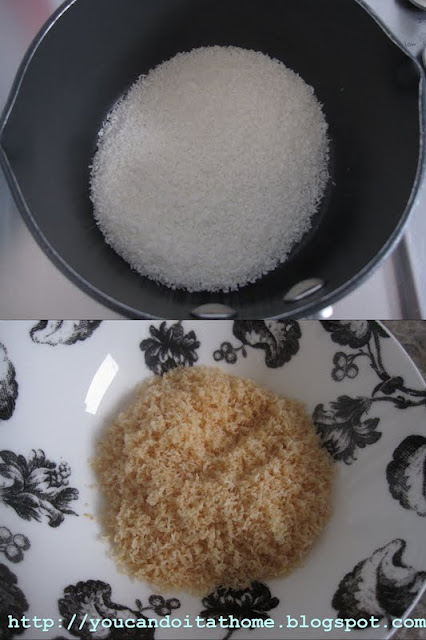 Sift almond meal, 50 g ground coconut and icing sugar together through fine sieve and set aside.

Divide egg whites into two equal portions (50 g each portion).  Pour the first portion of egg white (50 g) and colouring powder into the icing sugar mixture.  Don’t mix or stir them, just leave it as is.

Put the water and caster sugar in a heavy-base saucepan over medium-high heat. When the syrup start to boil, place the rest of egg white (50 g) into a mixing bowl, using the whip attachment, whip egg white to the soft peak. When the syrup reaches 118°C (on a thermometer), take if off the heat and let it cool down to 115°C (or until the bubbles subside).

While the mixer is still running, slowly pour the sugar syrup down the side of the bowl. Be careful not to pour syrup onto the whip as it might spatter.
Continue mixing until the meringue cool down to slightly above body temperature (50°C) or when the side of the mixing bowl is warm to touch. The whipped egg white will be (very) stiff and glossy.

Put the mixture into a piping bag fitted with 1-cm plain tip (size #11). Pipe the staggering rows of 1-inch rounds onto baking papers or baking sheets. You will need two trays for this recipe.

Preheat the oven to 160°C (fan-force or convection oven, increase the temperature by 20°C if you’re using conventional oven) for at least 15 minutes. Just before baking, turn the temperature down to 150°C and bake the macarons for 15 minutes.

Store macarons in airtight container in the fridge. Macarons will taste better after they are chilled overnight.
Making toasted coconut pandan chocolate ganache
Put white chocolate in a separate bowl.


Wash pandan leaves and tie them into knots (I tied leaves together into one knots). 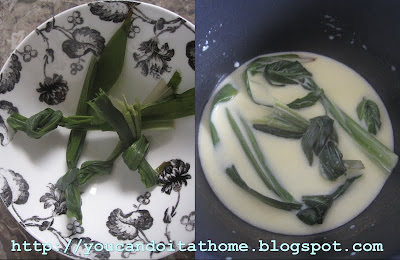 Place cream and pandan leaves in a small saucepan over medium heat and bring the mixture to the boil. Turn off the heat and let the mixture stand for 30 minutes to infuse the pandan flavour.
Return the cream mixture to the medium heat and bring it to the boil. Remove pandan leaves and pour the cream mixture over white chocolate. Leave it for about 10-20 seconds. Stir the chocolate and cream mixture until melted. Scatter butter pieces on the mixture and stir until well combine. Mix through toasted coconut and colouring liquid (if using) until well combined.
Chill the ganache at least an hour before using. 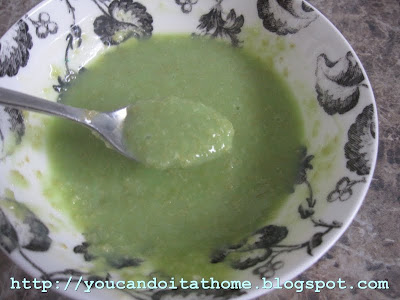