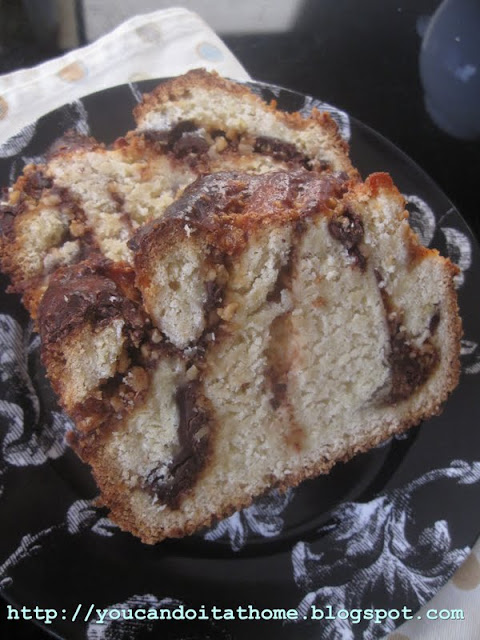 I found this recipe in Dan Lepard’s Exceptional Cake cookbook. Given that it was book about cake, I didn’t expect to see baked goods with yeast in there, especially not for the dish called Krantz Cake.
Apparently (quoting Dan Lepard) yeast cake is a feature of German baking. I was curious to find out how yeast leavened cake would be different from baking powder or soda.
I expected the cake to have texture of soft bread, like brioche, something soft but still feel like bread. It actually turned out to be quite cakey soft, which I think resulted from the mixture of butter, egg yolks, cream cheese and sour cream in the dough (lots of fat and sugar going in there, which, come to think about it, was typical for cake). However, it wasn’t as crumbly and fluffy as the usual cake. It still got some chewy texture in it, which was rather nice.

The recipe called for walnut, sugar and chocolate for bread filling. I replaced ground walnut & sugar with crushed peanut praline I made some weeks ago. The crushed peanut praline went well with the recipe. It gave caramelised crust and lovely flavour. The cake shape is similar to babka (cut-side up plaited bread). 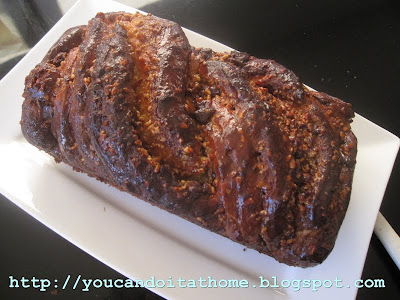 The recipe didn’t get to the good start. At the start of the recipe, it required mixing yeast with 2 tablespoons of flour and 1 tablespoon of water (which made 50% hydration). It stated the mixture was ready when there were bubbles. With 50% hydration, it was a very stiff little dough and was not going to bubble. So, I tripled the amount of water to create liquid like flour paste instead. I wonder if this was a typo?
Original recipe made two 500g cakes but I reduced the recipe amount by 20% to get one 750g cake to fit the pan that I had. Following recipe also reflected that change.  The cooking time was little longer than the recipe suggested (mind you, my cake was a little bigger too). The cake/bread was brown rather quickly (I think it was the result of peanut praline and chocolate).
The cake smelt so good. It came out of the oven around 11pm and I was so tempted to have a slice. I had to try so hard to wait until after I took the photo next morning (so proud of myself to fight the temptationJ). It was well worth the wait. It tasted wonderful. I love the flavour of nutty toffee praline and chocolate together. The cake itself also had a lovely soft texture, benefited from those enriched ingredients. It was also attractive cake inside and out and would make a great afternoon tea. 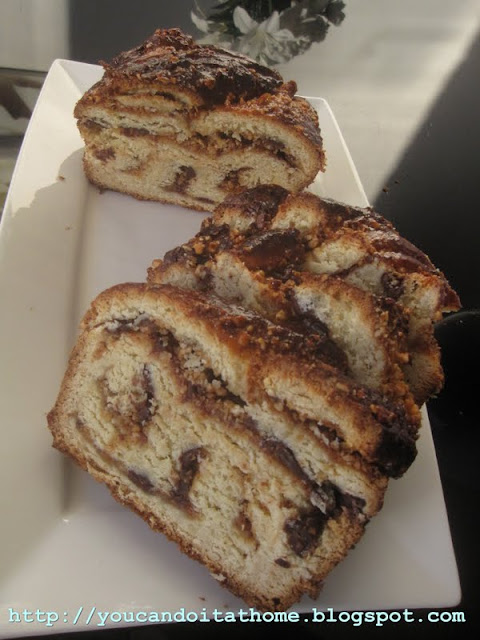 Note:
The recipe will fit 23 x 13 cm bread tin.
Recipe calls for one sachet of fast action yeast (which is 7 g). I used instant dry yeast and increased the amount to compensate with reduced strength.
It is a two-day process. The dough is chilled overnight after the mixing and shape the next day.
The dough is quite sticky after the mixing but it will firm up after an overnight resting in the fridge. It also felt rather stiff at first when taken out of the fridge. But once you get rolling, it will get soften and is relatively easy to roll.
The filling is rather dry which makes it a little challenge in shaping. If fillings have fallen off during shaping and fitting in the pan. You can simply push them inside the bread in the tin.
Krantz (yeast) Cake with peanut praline and chocolate filling
Adapted from Exceptional Cake


Transfer the sticky dough to a lightly oiled bowl, cover with cling film or plastic bag and leave in the fridge overnight.

The next day, remove the dough from the fridge 20-30 minutes before you start working with it (the dough will be stiff at first but will get softened once rolled). Lightly oil the loaf tin (I used 23 x 13 cm loaf tin for this recipe).


Prepare the filling, mix crushed peanut praline (or mixture of walnut and sugar, if  using) and chocolate in a bowl and set aside. 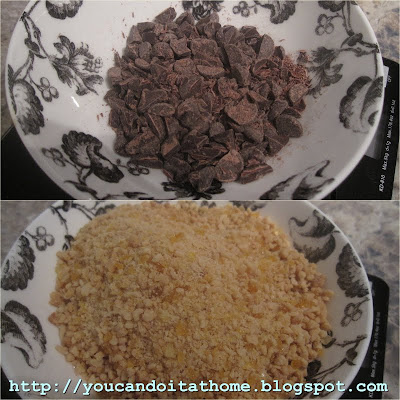 On a lightly floured surface, roll out the dough to a rectangle about 4-mm thick. Spread with the filling (leave about 1-cm around the edge) and roll up like a swiss roll, from a short side (the short side should be about 1-inch longer than the baking tin). With a sharp knife, halve the roll lengthways, then twist the two pieces together loosely, keeping the cut sides up (more info and photo on the loaf shaping can be found here). Drop the piece into a prepared loaf tin, cover and leave to rise in a warm place for 1 1/2 - 2 hours.

Brush the cake surface with egg wash over the cake and bake for 15 minutes. Lower the oven temperature to 160C, and bake for a further 25 - 30 minutes (it took me further 40 minutes) until well brown (the cake will brown quickly because of sugar and chocolate filling + egg wash. Finished cake will be really really brown).
Dissolve the sugar in the water and bring to the boil. Brush over the cakes while it is still hot. Leave to cool in the tin for 10 minutes, before turning out on to a wire rack to cool completely.


Submitting this post to wonderful YeastSpotting.
Posted by Sue at 8:58 PM