Chocolate Croissant - what's not to love! 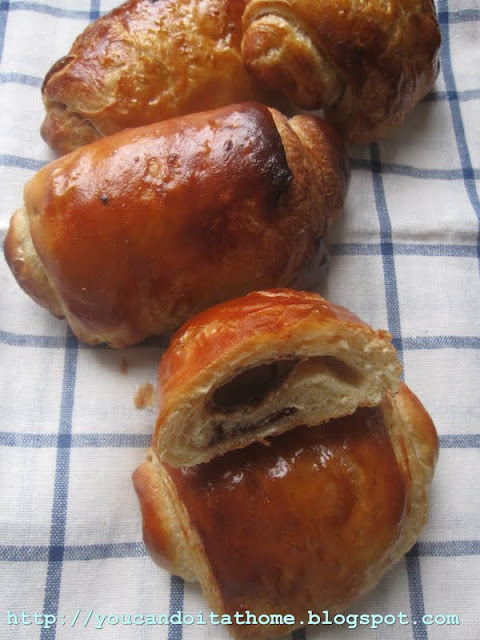 My croissant project is coming along nicely. I have been practicing on croissant/laminated dough for the past couple of months. The results are getting more consistent and predictable.

Though there were hits and misses, I am happy that I could produce patisserie-like croissant. They might not have looked perfect but they tasted wonderful and as good as the patisserie-bought ones (at least, I’d like to think so).
Before I embarked on the croissant-making journey, I always thought that it was too hard to tackle. It was one of the things that should be left with professional, not home cook. This was simply wrong. Croissant/laminated dough can be made successfully…at home! It is probably not the easiest thing but it is possible. With practices, baking tips, good recipe, and the will, you can definitely make it.

I made chocolate croissant a few times by using scraps of the laminated dough (the trimming from shaping croissants). It worked really well even with the dough scraps. They appear to be the favorite for many, which wasn’t a surprise. Dark chocolate melted in flaky buttery pastry…what’s not to love! This time, I made them with whole wheat croissant dough. The recipe will also work well with any laminated dough. 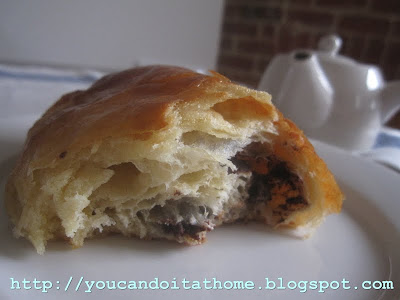 Traditionally, chocolate croissants are made with chocolate batons (long thin bar). I don’t have access to these. I have used chocolate chips and chocolate bar (cut from chocolate block). They both worked perfectly well.

The chocolate lasted well the whole weekend (after giving some away to our neighbours). Day-old chocolate croissants were as nice as fresh ones when they were reheated in the oven for 5 –10 minutes at 175C.


Makes 12 – 15
Ingredients
1 quantity croissant dough (recipe for whole wheat is here, and normal croissant is here)
24 – 30 chocolate baton or 100 g chocolate chips
egg wash (1 egg mixed with 2 tablespoons of milk)
Method
Follow the instruction on making croissants dough (here or here). The dough needs to be completed with three turns.
Remove the rested croissant dough from the fridge. Roll it into rectangle with 5-mm thickness (approx 30 x 60 cm).
Cut the dough into (approximately) 8 x 14 cm rectangles. Place (and stack) the rectangles on trays lined with baking paper and place in the fridge for about 10 minutes to let the butter become solid after the rolling and let the gluten relax.
Remove the rectangles from the fridge and put chocolate bar or chocolate chips at the base of rectangle, with the shorter side close to you. Roll the rectangle up to enclose the chocolate. Place another piece of chocolate in the same way as previously. Roll the rectangle up tightly to become a roll. 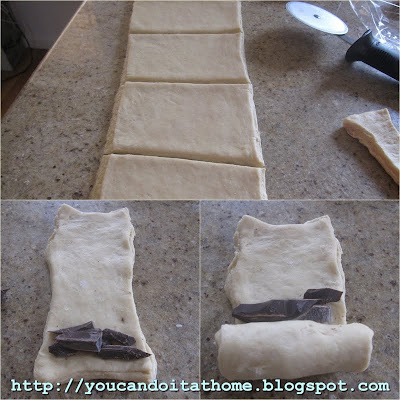 Place the rolls on baking trays with seam underneath (you will need two trays for this recipe). Make sure you leave generous space between them as they will expand during proofing and baking.


Proof the croissant in warm and humid place (around 25 - 27 C) for 2 – 2.5 hours or until it is doubled in size.
To create humid proofing environment, you can either:

- Lightly brush the surface of croissant with egg wash before proofing. Cover the trays with either tea towel or plastic bag (I prefer tea towel, as it is less sticky to the dough surface), or
- Cover the trays of croissants with damp tea towels. Occasionally spray more water to the tea towel if they become dry (I prefer this method as it is less sticky and the crust won’t be overly egg-washed).

It is critical that the croissants are fully proofed. It is well proofed when you can see the layers of the laminated dough and they are very soft and wobbly. Fully proofed croissant will deliver flaky and well risen finished products. It is also least likely the butter will leak during baking.
Pre-heat the oven to 240C (reduce to 190C before putting croissant in the oven).
Remove the tea towel, lightly brush the dough surface with egg-wash and place them in the oven. Reduce oven temperature to 190c and bake for 15-20 minutes, or until they're a deep golden brown.
Submitting this post to YeastSpotting.
Posted by Sue at 9:12 PM