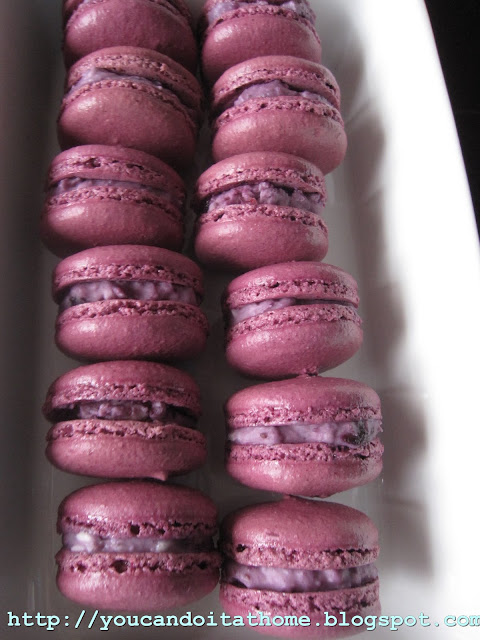 I love cheesecake or the cream cheese in particular. It used to be my dessert of choice. If I had to name my own poison, it was always the cheesecake on the top of my mind.
That was before I met the new love of my life, macaron. Don’t get me wrong, I still love cheesecake or cream cheese and its unique creamy and sour flavour combinations. Wouldn’t it be nice if I can combine my two greatest beloved food items into one? Cheesecake macarons sound like a fabulous idea, for me
Personally, I think cream cheese by itself is a little lacking, so a flavoured cheesecake macaron was in the agenda. When it comes to cheesecake, one flavour that comes to my mind is blueberry cheesecake. Blueberry cheesecake is (or was, I’m not sure given that I have left Thailand for over a decade now) a popular dessert in Thailand for both home-made and shop-bought. I suppose it is easy to make at home with limited equipment. It’s the kind of cheesecake that doesn’t require baking and most homes in Thailand don’t have ovens. And of course, it is popular because it tastes good.
I recently bought a book called Flavour Thesaurus. It’s about flavour pairings. It’s an interesting book and makes me look at some of the ingredients differently and more creatively. What the book said about blueberry was that blueberry on its own was bland, sort of flavourless. However, when it paired with lemon, it created spectacular flavour. It is something never occurred to me before and it is so true. It also got me thinking that maybe this is why blueberry is so well-matched with cream cheese. It seems that blueberry needs acidity to help it shines. 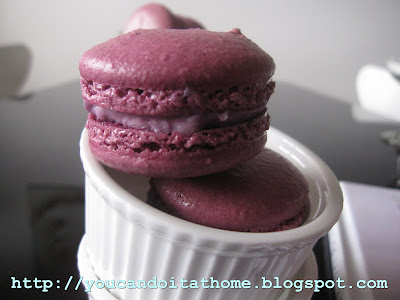 I made the blueberry cream cheese filling as I would do with cheesecake filling, a mixture of whipped cream, cream cheese and blueberry jam (in this case a reduced blueberry cooked with sugar and lemon juice). To match the colour of blueberry, the shell needs to be purple, a challenging colour to mix for macaron shells. When I made the lavender macarons and wished to get pale purple colour, I ended up with blue (purple = red + blue). A word of caution, be easy with blue colouring, a little of it goes a long long way. It is a good idea to start with red colour first and gradually add small amount of blue at a time until you achieve the purple colour.
This flavour doesn’t disappoint. Almond meringue shell makes a perfect base for cheesecake filling. The moisture and tang of cheesecake filling works really well with the sweet macaron shell. It is one of my favourite macaron flavour, it’s no surprise there...it’s the two most-loved food items for me, cheesecake and macaron. Nothing can’t go wrong!
Here is the recipe….

Making macarons shells
Sift almond meal and icing sugar together through fine sieve and set aside.

Divide egg whites into two equal portions (50 g each portion).  Put one egg white portion (50 g) into a bowl and mix in red and blue (or purple) colouring powder or liquid until you achieve the desired colour. Start with red colour first and gradually (seriously gradually) add blue colour into the mixture until you get an intense violet colour. The colour will be substantially diluted once it is mixed into the macaron batch.


Pour the coloured egg white into the almond meal/icing sugar mixture.  Don’t mix or stir them, just leave it as is. 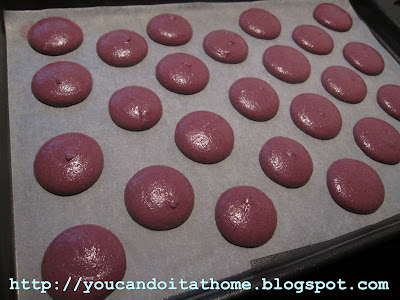 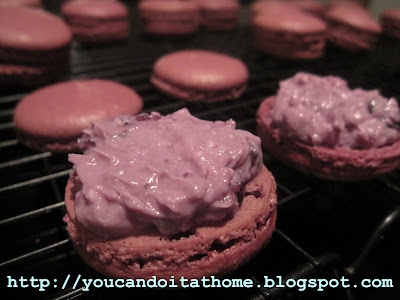 Soak the gelatine sheet in cold water (make sure that all part of the sheet is hydrated).

Making  Blueberry Cheesecake Filling
Put blueberry, sugar and lemon juice in a small heavy-base saucepan over medium heat. Bring it the boil and simmer for 5 minutes. Squeeze the water out of the gelatine sheet and dissolve it in the blueberry mixture. Set aside.
Using electric mixer, whip the thickened cream to a whipped cream texture. Set aside in a bowl and chill until ready to use.

Chill the filling about 30 minutes before using.
﻿ Submitting﻿ this post to Weekend Herb Blogging hosted by Rachel from The Crispy Cook.
Posted by Sue at 3:00 PM