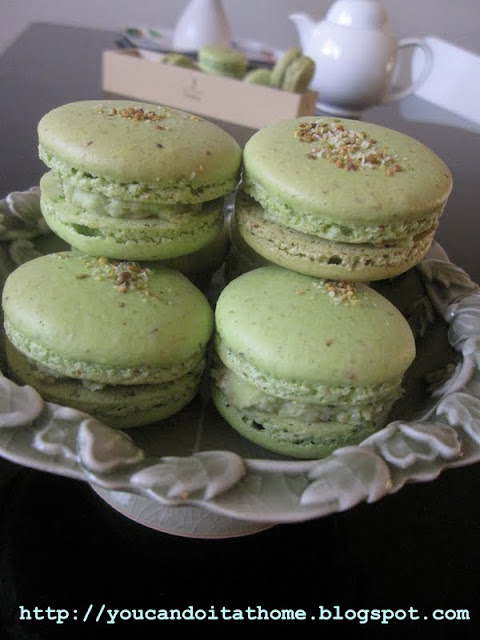 I have a relatively long list of macaron flavours I want to make. Pistachio is one of them, though not really on the top. However, I moved it up the list as S’boss (a French-Australian) requested for some.
Pistachio (Pistache) Macaron  is one of the classic French flavour. I remember seeing macaron packs at CostCo (imported from France) with presumably four classic flavours and pistache is one of the four. The rest of the flavours are vanilla, chocolate and raspberry.
I followed the pistachio butter cream recipe from Jose Marechal’s Secrets to Macarons. The filling was made of ground pistachio mixed with butter and sugar, which produced relatively dry filling. I also substituted part of almond meal with ground pistachio in the macaron shell.
The creamy, sweet and nutty aroma of ground pistachio was wonderful. It was even more so when the macarons were being baked. It filled my house with fantastic aroma.

Pistachio macarons stayed crisp and dry for longer due to its relative dry filling. It also froze well. However, if you’re one of those who like moist macaron, you probably don’t like it. On the other hand, this version of pistachio macaron will be ideal for crisp macaron lovers.
The macarons had well-raised feet. I started to believe that mixing other ground nuts with almond meal gave better-formed macaron feet (the Snickers Macaron I made with ground peanuts also produced  well-raised  feet). These were one of the best feet I had so far. 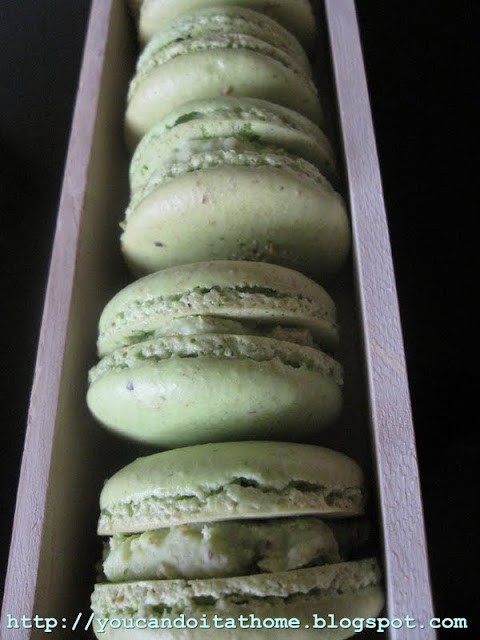 Divide egg whites into two equal portions (50 g each portion).  Pour one egg white portion (50 g) into the almond meal/icing sugar mixture. Add colouring powder or liquid to the mixture. Don’t mix or stir them, just leave it as is.


Beat the softened butter using a whisk or an electric beater, to obtain a smooth and creamy texture.

Add the icing sugar and beat again. Finally, incorporate the pistachio paste, then beat again for a few more minutes to aerate cream and give it lightness.
Set this aside, it is not necessary to chill the buttercream as it is a firm filling. 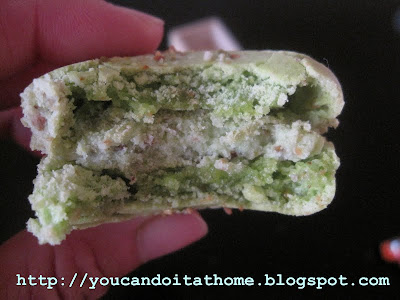