Soy and Linseed Sourdough - full of goodness and texture 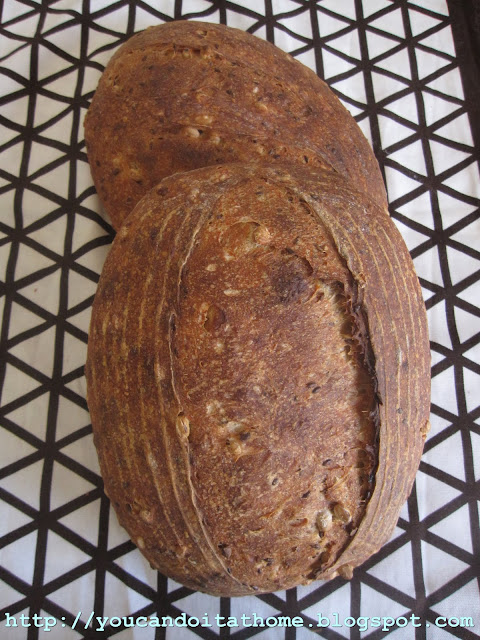 Soy and linseed bread is supposedly good for heart health, at least it’s what the bread manufacturer is trying to tell us which I believe it has some merits. The bread is a healthy choice as it contains soy beans, soy flour and linseeds which  high protein, high fibre and omega-3.
I made this same bread before some months ago combining Jeffrey Hamelman’s method and Bourke Street Bakery recipe (not entirely). This time I followed Bourke Street Bakery’s recipe closely. Umm, closely, I actually increased the amount of both soy beans and linseeds substantially (double the amount for both soys and linseeds), upped the amount of water a little (hydration percentage) and replaced 10% of bread flour with whole wheat flour.
The recipe called for soy flour, which I didn’t use in my previous bakes. I didn’t think that I was able to find the flour and I was not a fan of buying a big bag of ingredient specifically for one recipe. However, I also like to experiment with new things/new flours and I came across soy flour at Asian grocery store. The flour has very interesting texture. It was moist, creamy and mushy. It felt almost like the blended soy beans, only drier.

I was glad that I included soy flour into the dough as suggested by the recipe. The flour added moisture, tenderness and creamy colour to the crumbs. The bread was lovely, nutty and full of textures. I was also surprised how sweet the bread was, which I believe the soy flour must have contributed to some of the sweetness.
Be warned that this bread was rather wet and slack due to its high hydration and added water from seed soaker. BSB recipe suggested beans were soaked and drained before adding to the final dough. With this method, it was impossible to drain all water from the soaker and it was also impossible to calculate what hydration (how much more water) the soaker contributed to the dough.
However, the dough wasn’t too wet to work with and it was okay when it came to shaping. You can also decrease amount of water by 5% (or 48 g) to match Bourke Street Bakery’s original recipe.
Soy beans in the bread tasted amazing, I love the texture and its creamy nutty flavour. It was just lovely.  I am also wondering if soy and linseed bread is Australian thing or it is something common. 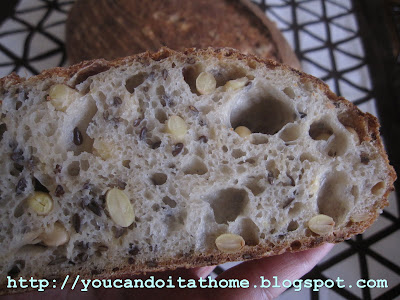 Preparing seed soaker – Mixing soy beans, linseeds and water together in a small bowl, cover and leave at room temperature at least 6 hours before making the final dough.
Preparing final dough - Add all the ingredients to the mixing bowl, except salt, soy flour and seed soaker.  Mix until the ingredients are incorporated. Leave it to autolyze in a bowl covered with plastic bag or wrap for 15 - 30 minutes.
Sprinkle salt over the dough surface and mix on the first speed for 3 minutes and continue mixing on second speed for further 3 – 4 minutes, until medium gluten development is achieved (a small piece of dough can be stretched gently until you can see the transparent membrane and dough doesn’t tear). I kneaded this by hand and it took about 15 minutes.
Drain water out of seed soaker. Mix soy flour to the seeds.
Mix the soy flour and seed mixture into the dough until fully incorporated.
Bulk fermentation - Leave the dough in a lightly oiled container and cover the bowl with plastic bag or wrap for 2 hours until doubled in size. Do one stretch-and-fold after one hour.
Divide the doughs into two (for large loaves) or three (for medium loaves) equal portions. Pre-shape the doughs into rounds and let them rest for 10 – 15 minutes under a tea towel.
Shape the doughs into oblong (batard) or boule (round) and place into proofing baskets/bowls. Slip the proofing basket into a large plastic bag. Retard the dough in the fridge overnight or proof at room temperature for 2 hours or until they are almost doubled in size.
Baking: If retarding, take the dough out of the fridge and leave them at room temperature for 60-90 minutes before baking. Preheat the oven to the highest temperature and prepare the oven steaming. 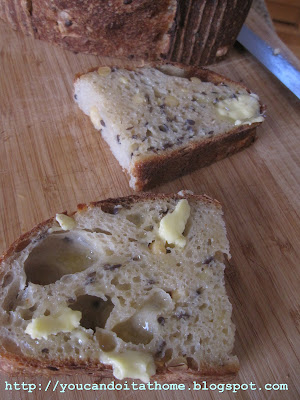