Apple and Oat Sourdough - fresh fruit toast for a change 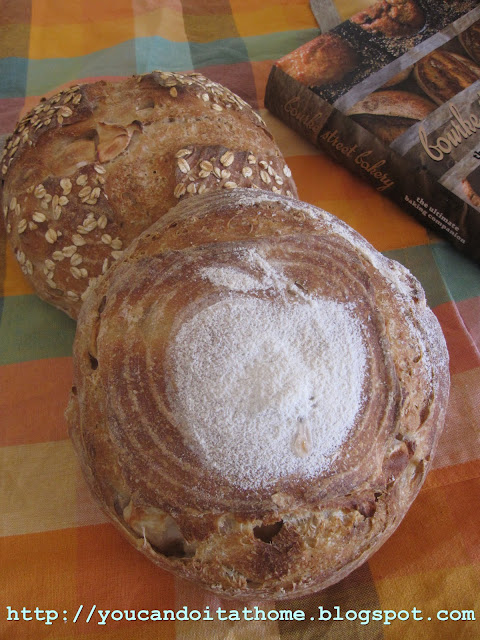 I still had some leftover apples from S’ dad’s home-grown. They were delicious, juicy and slightly tart. I wasn’t exactly sure what kind of apples they were. My guess would be ‘Golden Delicious’ because of its golden colour and sweet yet tart flavour. I was pleasantly surprised that the apples were still lovely after being sitting at room temperature for over a month.
We quite enjoyed the apple bread I made couple of weeks ago, from Dan Lepard’s Exceptional Bread. This time I wanted to try different recipe and my heart was set at apple and oat sourdough from Bourke Street Bakery cookbook. The apples that we had would be just enough for the bread.

This recipe uses basic sourdough with added chunks of apples and soaked oats. I adjusted the recipe a little by substituting 10% of bread flour with rye flour. I also increased the amount of water a little (hydration ratio) my dough hydration (not including water in oat soaker) was 65% comparing to 62% in original recipe. 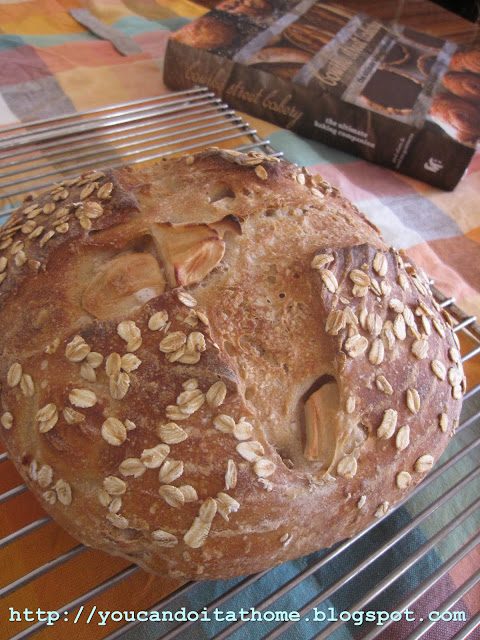 BSB sourdough recipe includes high ratio of starter, over 40% against total flour. Now that I was making bread during cold autumn mornings and nights, I found it worked out quite well with the fermentation and flavour. I also followed the book by feeding my starter three times at 8 hours interval before the final mixing, which, I believe, enhanced the flavour and gave better bread texture (the crumb were more open).
We loved the oats in the bread and on the crust. It contributed to moister crumbs, and lovely creamy earthy flavour. Somehow, the oats seems to disappear into the crumbs, it was hardly noticeable. We also loved the oats on the crusts, it gave the milky creamy flavour, it was just lovely. The chunks of apples inside the bread enhanced the flavour significantly. They gave such a nice aroma, and sweet & tart flavour to the crumbs around them. It felt like we were having a fresh fruit toast for breakfast. What a nice change from dried fruit toast, not to mention the real flavour and no added-sugar from dried fruits. 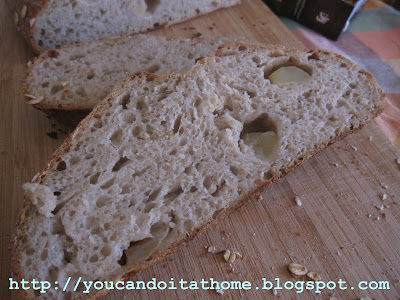 Comparing this bread to Dan Lepard’s I made the other week, we loved the BSB’s better. It’s is simple and clean with fewer ingredients. It tasted simply better, or should I say it matched more with our taste buds, or simply more Australian:). It was such great tasting bread with simple ingredients, no added-fat or sugar (or any sweetener).
It also made me wonder what the bread would really taste like at Bourke Street Bakery itself. Sometimes, I just felt like flying to Sydney and find it out once and for all.
Note on the recipe:
Hydration looks high because it included 9% of water from oat soaker.
Oats were soaked with cold water 5-10 minutes before the mixing . I was curious at first if that would work as I usually make hot soaker for oats. It was surprising to see how oats were broken down easily and quickly.
Apples and oats were incorporated when the dough were fully-kneaded, when the gluten has been formed. It was a bit of a challenge to mix apple and oat mixture into the dough. Folding would work better, in my opinion.
I used Golden Delicious apples, but I think any firm apples will work as fine. Anything in season is good.
I also did apple stencil onto the bread before it went into the oven. 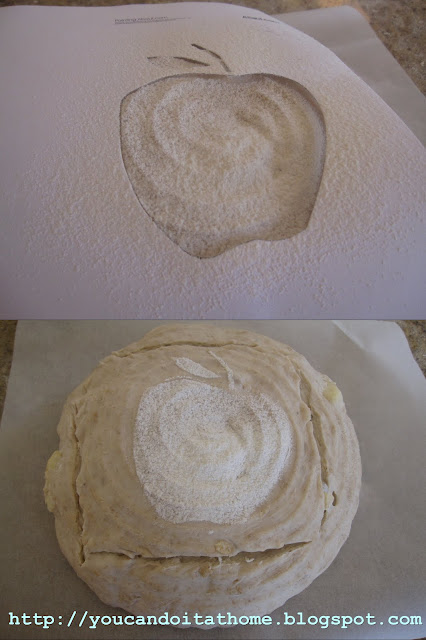 Preparing oat soakers – Mixing soaker and water together and set it aside for about 10 minutes.
Preparing final dough - Add all the ingredients to the mixing bowl, except salt, apples and oat soaker.  Mix until the ingredients are incorporated. Leave it to autolyze in a bowl covered with plastic bag or wrap for 15 - 30 minutes.
Sprinkle salt over the dough surface and mix on the first speed for 3 minutes and continue mixing on second speed for further 3 – 4 minutes, until medium gluten development is achieved (a small piece of dough can be stretched gently until you can see the transparent membrane and dough doesn’t tear). I kneaded this by hand and it took about 15 minutes.
Mix the apple pieces and oat soaker together.

Gently fold the apple and oat mixture into the dough by gently patting the dough into rectangle about 1-cm thick. Scatter the apple and oat mixture over the dough surface. Wrap the dough to enclose filling. Alternatively, mix the apple mixture in on first speed using electric mixer.
Bulk fermentation - Leave the dough in a lightly oiled container and cover the bowl with plastic bag or wrap for 2 hours until doubled in size. Do one stretch-and-fold after one hour.
Divide the doughs into two (for large loaves) or three (for medium loaves) equal portions. Pre-shape the doughs into rounds and let them rest for 10 – 15 minutes under a tea towel.
Shape the doughs into oblong (batard) or boule (round) and place into proofing baskets/bowls. Slip the proofing basket into a large plastic bag. Retard the dough in the fridge overnight or proof at room temperature for 2 hours or until they are almost doubled in size.
Baking: If retarding, take the dough out of the fridge and leave them at room temperature for 60-90 minutes before baking. Preheat the oven to the highest temperature and prepare the oven steaming.

Lower temperature to 225C and bake for 40 - 50 minutes with steam for the first 15 minutes..
Submitting this post to YeastSpotting.
Posted by Sue at 10:17 PM