Passionfruit Macaron - when the love affair with macaron began... 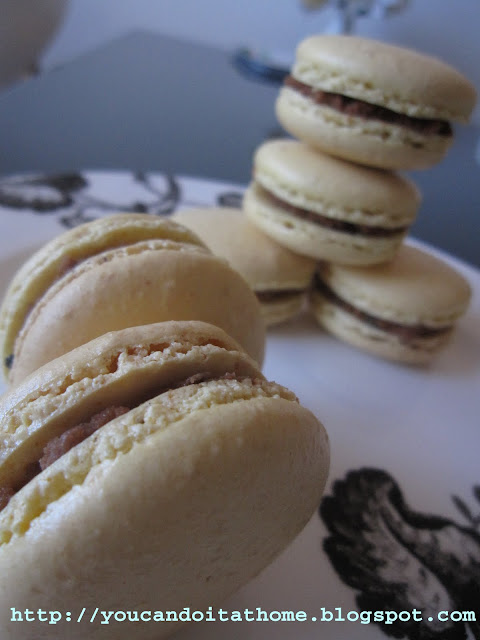 Passionfruit macaron has a special place in my heart. It was the first macaron I tasted and fell in love at first bite and I still recall that moment vividly. It was from a French patisserie at The Rock, Sydney that I stumbled upon during my trip to Sydney couple of years ago. It was one of those magical experiences. The pretty little morsel that was so light and crisp. It melted in my mouth and release amazing flavour. It was like “wow, what is this stuff? Why haven’t I had them before? Where have I been?”.  It was also fortunate that the first macaron I had was a great macaron. Generally, I find commercial macaron in Australia to be average (to put it politely… as in many instances, they are simply mediocre).
In my opinion, passionfruit makes a fabulous dessert. It is good in cake, slice, mousse, panna cotta, to name a few. And Pavlova won’t be complete without passion fruit. And yes, it makes great macaron. 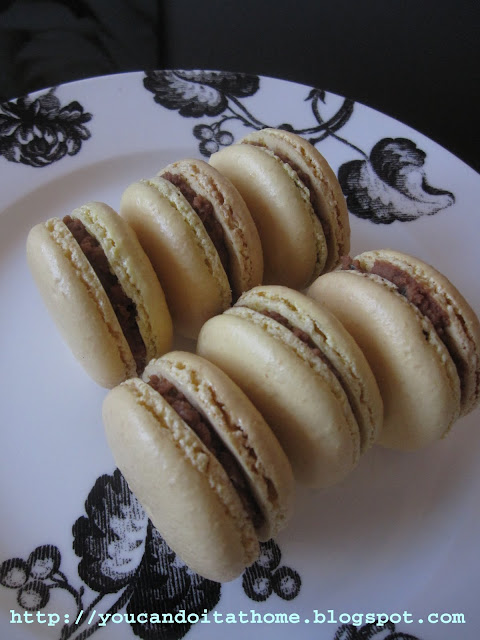 I also find coconut complements passionfruit well. Therefore, I included grinded desiccated coconut in the macaron shell for additional flavour. At first, I was divided between using white chocolate or milk chocolate for the passionfruit ganache. Dark chocolate wasn’t an option as I think its flavour would overpower passionfruit.  I chose to use milk chocolate for a change.
Don’t you love the coconut aroma in the baked goods. It is even more so when those coconut cakes or macarons were being baked. It is truly sensational.
Coconut added sweet, creamy and toasty flavour to the macarons. It worked well with the subtle flavours of passionfruit ganache. I also think Italian buttercream would work well with passion filling too, maybe next time.
A bite into passionfruit macaron let me relive that magical moment, the first encounter to my most-loved pastry item.
Can you remember the first macaron you tasted? 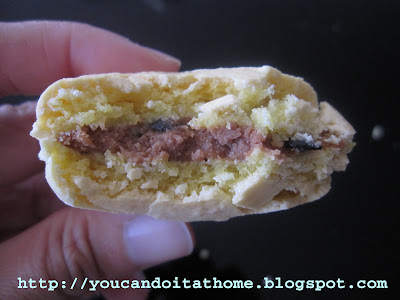 Divide egg whites into two equal portions (50 g each portion).  Put one egg white portion (50 g) into a bowl and mix in yellow colouring powder or liquid until you achieve the desired colour. The colour will be substantially diluted once it is mixed into the macaron batch.
Pour the coloured egg white into the almond meal/icing sugar mixture.  Don’t mix or stir them, just leave it as is.

Bring cream to the boil in a small saucepan over medium heat. Remove it from heat as soon as it comes to the boil.

Pour hot cream into chocolate. Leave it for about 10-20 seconds. Stir the chocolate and cream mixture until melted. Scatter butter pieces on the mixture and stir until well combined. Mix through passionfruit pulps until all combined.

Chill the ganache at least an hour before using.
Posted by Sue at 10:55 PM