Semolina Sourdough with sesame seed - this time with durum flour 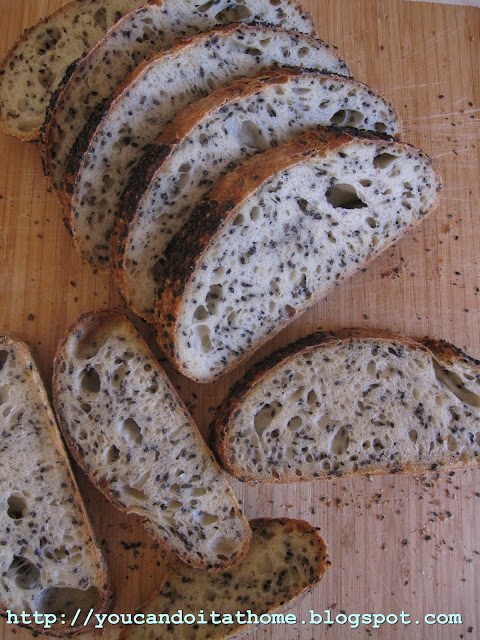 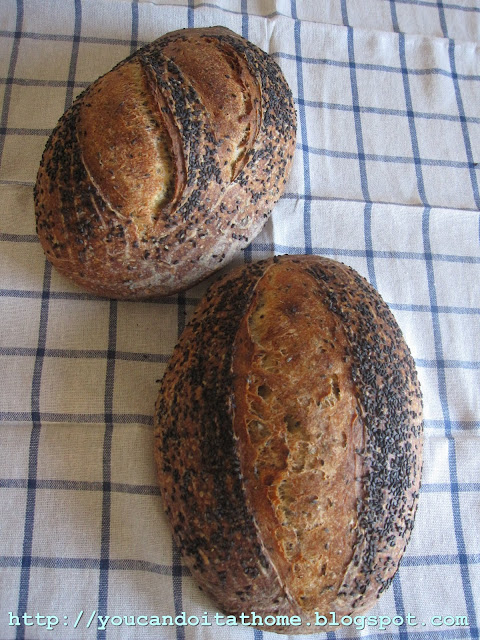 Fine semolina worked in the recipe however durum flour would produce bread with better rise and crumb structure. Personally, if I can’t find durum flour, I’ll be happy with this bread made with semolina as well.
This dough was pleasant to work with. It has smooth and satiny texture. It was almost effortless to have gluten developed. In fact, Hamelman stated that durum flour had high gluten which can develop quickly. The gluten can also be unknit as quickly, care needs to be taken not to over-mixing the dough.
This bread is one of my favourite. I love the aroma and texture of sesame seeds in bread (or in anything really) and the durum flour also add sweet creamy flavour to the bread, and tender crumb. I used black sesame seeds instead of white as I find the black sesame seeds is more flavourful. I love its smoky flavour. I toasted the seeds in the pan instead of oven. It is something I enjoy, doing thing with my hand, and inhale the aroma of food as I go along. 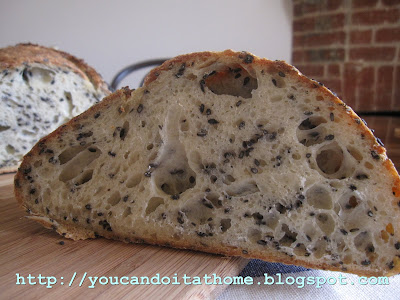 Bread flour 227 g
Durum flour 544 g
Water 437 g
Salt 17 g (1T)
Sesame seeds, toasted 45 g
Liquid levain 306 g (all less 2 T)
Method
Liquid levain: Make the final build 12 to 16 hours before the final dough. Leave levain in a covered container and leave it at room temperature.
Mixing: Add all the ingredients to the mixing bowl, except salt and sesame seeds. Mix until they are combined and form a dough ball. Leave the dough in bowl covered with plastic wrap or bag for 30 minutes to autolyse.
Sprinkle salt over the dough surface and mix well. Mix on low-medium speed for 5-7 minutes until moderate gluten is achieved. I knead the dough by hand and it took about 15 minutes.
Be careful not to over-mix the dough as durum flour gluten will quickly unknit if the gluten is overly developed.
Bulk fermentation: Leave the dough in a lightly oiled bowl covered with plastic wrap or bag for 2 hours or until it is doubled in size. It took 2.5 hours for me to fully ferment the dough.
Folding: Do one stretch-and-fold after 1 hour.
Dividing and shaping: Divide the dough into two equal pieces. Pre-shape into rounds and let the rest under a tea towel for 15 minutes for gluten to relax.  Shape the dough in round (boule) or oblong (batard).
Final fermentation: Approximately 2 hours or until it is about 1.5 of its original size.
I retarded the shaped loaves overnight in the fridge for 9 hours. After I took the shaped loaves out of the fridge, I let them  sit at room temperature for two hours before baking. The weather was getting cooler in Melbourne. It used to take only an  hour during late Summer.