Apple Sourdough Bread - the scent of apples, the sign (or sigh) of autumn 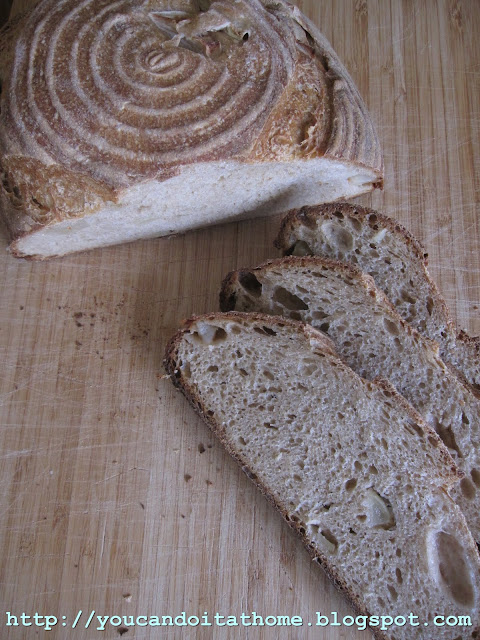 This is the first time I used recipe from Dan Lepard’s, arguably the most successful baker in UK.  The recipe comes from his book: Exceptional Bread. It is also first time I bought bread making book originated in UK. Generally, most recipes are similar, only ingredients are called differently.
Flipping through the book, I came across Apple Bread ,using Bramble apple, which I had no idea what it was but the recipe suggested Granny Smith as an alternative. We had a big bag of apples from S’ dad, which I believe they were Granny Smith. They were home-grown in his house at Drysdale in country Victoria. I actually had the apples for quite sometimes but didn’t get the chance to make anything with it. 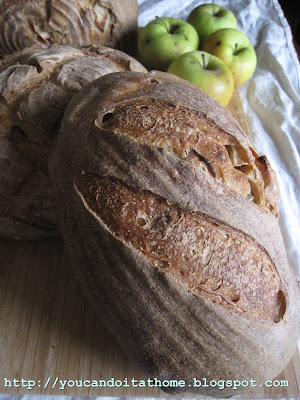 The recipe had no baker’s percentage. It has become my habit that I have to calculate the baker’s percentage to get a better feeling of the recipe. Personally, I feel like I am flying blind without the Baker’s Percentage.
And I was glad I did put the recipe into Baker’s Percentage. Dan Lepard’s recipe only has 45% hydration (with water and apple juice). The recipe also contains 10% of yogurt. If counting yogurt as hydration (which was not really the case, as yogurt might only contain 50% liquid and 50% fat and other substances), the total hydration is still extremely low at 55%. The recipe also contains 35% of combined rye and whole wheat flour. With rye and whole wheat’s water-absorbing capabilities, the effective hydration could be just 50%. It was a very very stiff dough to work with. I intentionally, didn’t adjust the water to start with as I wished to try Lepard’s recipe right on and adjusted the water as I went along. Turned out I had to add 10% more water. Even so, the dough was still relatively stiff. It made me wonder what were the reasons behind such a low hydration dough, was it because of 30% of apple in the final dough, or was it simply a typo?
Lepard’s recipe uses a mixed flour starter that was cultivated and fed with apple juice and yogurt. I am still quite new to bread making but I haven’t come across sourdough culture with apple juice and yogurt before. I had to convert the recipe into my usual starter fed with water and included the apple and yogurt into the final dough. I, though, wonder what flavour Dan Lepard’s sourdough culture would produce, and I’ll have to try using the starter with apple juice and yogurt in the future.
As Dan Lepard suggested that this was heavy dough. It was indeed heavy as it contains 30% of apple chunks inside. I believe this, somewhat, inhibited the bread rising. The crumb was somewhat tight, which could be the result of high percentage of rye and whole wheat flour, low hydration and heavy dough. The bread also didn’t gain the volume much. Original recipe has commercial yeast as optional (1 sachet, which I had no idea how big was a sachet in UK. I am guessing that it’s same as Australia’s, 7 g or 1% in baker's percentage term), which I omitted as I retarded the dough for 8 hours in the fridge. I also wonder if including commercial yeast would have given the bread more volume and open crumb.
I had trouble with shaping and scoring the bread because of the wet, soggy and chunky apples in the dough. I was afraid that the bread would split during and/or after the bake. So, it was a pleasant surprise to see that the bread held its shape well. 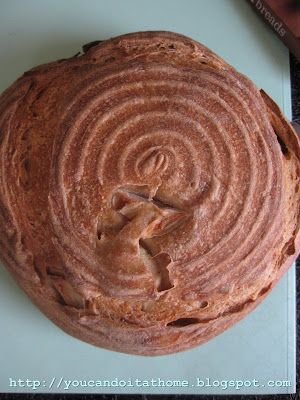 I also increased Lepard’s recipe by 40% to make three large loaves as a way to try using up the apples, and gave one loaf to our neighbour. I love sharing home-made food with people. It is an absolute joy to see people enjoying your fruit of labour.
All in all, this was flavoursome bread. The aroma of apple and its juice was fantastic. The flavour was quite complex with mixed flour starter, three different flours in the dough, apple juice and yogurt. The chunks of apples were tart and sweet at the same time. It added moisture and fantastic flavour to the bread. The bread tastes better as it ages as well. I honestly didn’t think much of this bread on the first day. It was sort of nice, but nothing more. The second day it tasted better but by the third day, it was excellent. I totally enjoyed it. 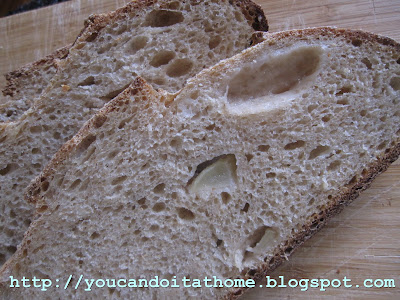 Prepare sourdough built:  Mix all ingredient together until well-combined about 12 – 14 hours before mixing the final dough. Leave it in a covered container at room temperature.

Mixing: Add all the ingredients to the mixing bowl, except salt and apples.  Mix until the ingredients are incorporated. Leave it to autolyze in a bowl covered with plastic bag or wrap for 15 - 30 minutes.
Preparing apples, peel and core the apples and cut them into quarters. Cut each quarters into 4-5 pieces.

Sprinkle salt over the dough surface and mix on the first speed for 3 minutes and continue mixing on second speed for further 3 – 4 minutes, until a strong gluten development is achieved (the dough can be stretched gently until you can see the transparent membrane and dough doesn’t tear).

Gently pat the dough into rectangle about 1-cm thick. Scatter the apple pieces over the dough surface. Wrap the dough to enclose apples.
Bulk fermentation: - Leave the dough in a lightly oiled container and cover the bowl with plastic bag or wrap for 2-2.5 hour until doubled in size.
Divide the doughs into three equal portions. Pre-shape the doughs into rounds  and let them rest for 10 – 15 minutes under a tea towel.
Shape the doughs into oblong (batard) or boule (round) and place into proofing baskets/bowls. Slip the proofing basket into a large plastic bag. Retard the dough in the fridge overnight or proof at room temperature for 2 hours or until almost double in size.
Baking: If retarding, take the dough out of the fridge and leave them at room temperature for 60-90 minutes before baking. Preheat the oven to the highest temperature and prepare the oven steaming.

Lower temperature to 225C and bake for 40 - 50 minutes with steam.
Submitting this post to YeastSpotting.
Posted by Sue at 10:32 PM