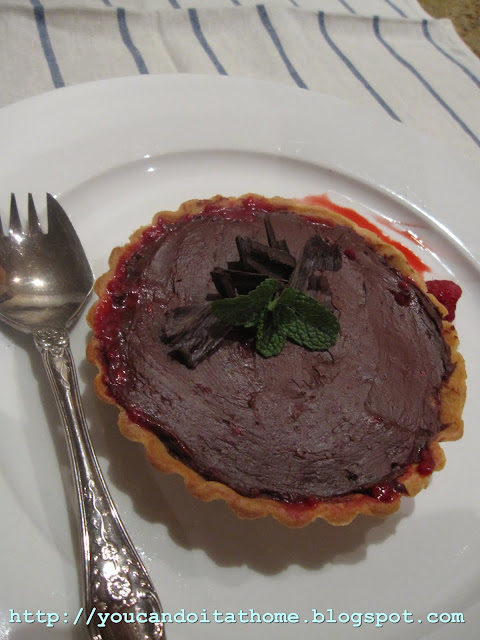 I had a plan…I had a vision about my Easter Macarons. Egg-shaped chocolate macarons filled with rich chocolate ganache mixed with peanut praline. The size would be about actual egg-size and ganache would be piped onto the shells decoratively and they would be served as dessert.
That didn’t eventuate as my convection oven was broken. Actually, I was persistent with the idea even though my oven didn’t work. I took the macaron batch to S’ house and baked from there.
You know the baker’s saying, “You have to know your oven”. This saying is so true for macarons, the most temperamental of all baked goods! I sort of know that S oven is hotter than mine. The actual temperature is hotter/higher than the temperature gauge. But I guess, I have been complacent with the macarons (I haven’t had failed batches for ages). The little diva just wanted to remind me how diva-like she could be!


I was shattered when I pulled the trays out. The macaron shells were as shattered as me. The shells were cracked, broken and sticky. This happened because the oven was too hot. Too high heat made the shells rose too quickly when they were not strong enough to withstand the rise. So, they cracked as a result. And once they’re cracked, there was no steam trapped inside the shell to help it cooked and puffed up. So, there were little feet and the shells weren’t cooked well as a result.
Thing was, I already made the ganache filling. At first, it felt like I had lost my will to make anything out of it. I was so ready to chuck it in the bin out of the frustration (Gosh, I was so involved with my baking sometimes, actually most of the times!). As frustrated as it was, I could have never thrown away food, not when it was still edible, not when it was chocolate ganache.
So, here goes, the chocolate ganache has become raspberry chocolate tart. I adapted the recipe from Michel Roux’s Pastry cookbook. This tart is simple yet so effectively delicious. The tart has fresh raspberry mixed with fresh mint leaves as the base and they are covered with chocolate ganache.
My chocolate ganache for macarons was slightly thicker than Michel Roux recipe. As a result, the tart didn’t look as smooth and looked a bit heavy but they tasted great nonetheless.
I used frozen raspberries instead of fresh. It worked well even though they became thick paste when mixed with mints. Mixing mints with raspberry was a great idea. It added more depth to the flavour of this tart. 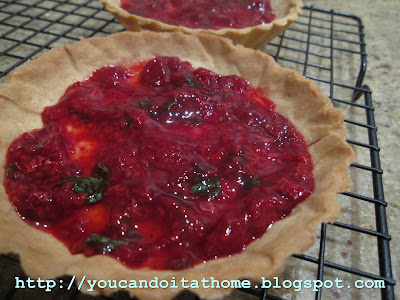 This is a fabulous tart with lots of flavour and texture;  sweetness from chocolate ganache, tart and tang from raspberry, refreshing from mint and texture from the tart base. My thick chocolate ganache looked clumsy on the tart and didn’t do it enough justice. I’m terribly sorry, Mr Roux.

The full recipe can be found here, in The Age newspaper website to which Mr Roux gave the interview about a year ago (the recipe is in page 2 and 3 or the web page).

Have a happy Easter to all! 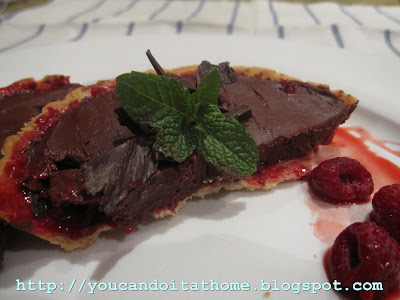 Email ThisBlogThis!Share to TwitterShare to FacebookShare to Pinterest
Labels: Pastry