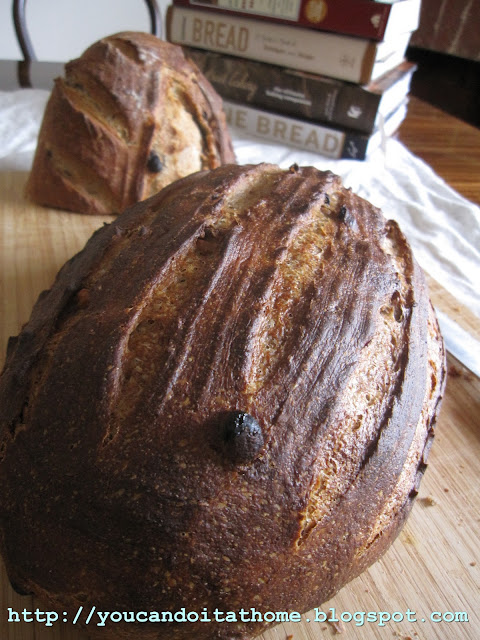 The rye adventure continues. I am now venturing into 35% rye percentage. I used Jeffrey Hamelman’s Sourdough Rye with Walnuts and Raisins recipe from Bread: a baker’s book of techniques and recipes. The recipe sounds quite promising; rye, walnuts and raisins. These are three delicious ingredients together. So, I upped the recipe about 25% to get 2 kg batch (2x 1 kg loaf). And we weren’t disappointed. The bread was delicious. Rye and walnuts are a classic pairing. With raisin added, it’s great trio.
I followed Hamelman’s recipe to include the commercial yeast in addition to the rye starter (in the past, I omitted the commercial yeast and increase the sourdough starter percentage and fermentation time to make up for that).  One of the advantages of including commercial yeast is shorter fermentation and proofing time. It only took 3.5 hours from mixing to finished loaves. It made a perfect bake for breakfast on weekend. I was happy with that. 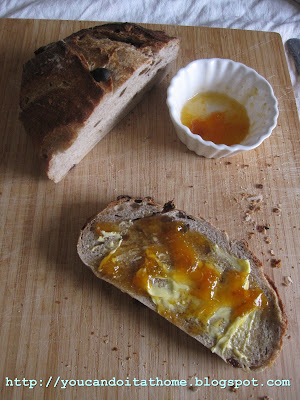 The breads got a nice texture from walnuts, natural sweetness from raisin and nice earthly flavour from rye. It makes a great toast. The walnut smells great when the bread was toasted.
This was the first time that I made the rye bread without retarding the dough. Few weeks ago, I made 20% rye bread with rye starter and overnight retardation and found the bread to be too acidic. The flavour of this week’s bake (without retardation) tasted better for me. It got nice flavour from rye without being too sour.


The crumb wasn’t as open as others. However, it is what to be expected with fruit and nuts breads. Dried fruits tend to impede the crumb opening and result in bread with tighter crumbs.  The bread also browns quicker comparing to others because of natural sugar in dried fruits. To prevent the bread over-browning before it is cooked, I had to reduce the temperature to 215C for the last 10-20 minutes. 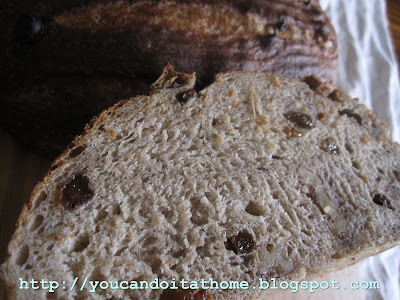 All in all, this bread is flavoursome and it was a fantastic change to rye fruits and nuts bread from the white ones. I would make this bread often if it isn't because I have a long to-bake list, which is getting longer faster than I can bake them.

Here is the recipe...
Rye Sourdough with Walnut and Raisin recipe
adapted from Jeffrey Hamelman's Bread: a baker's book of techniques and recipes

Prepare sourdough built:  Mix sourdough starter with water and add rye flour to the mixture. Mix until it is well-combined. Leave the sourdough in a covered container at room temperature (70°F or 21°C) for 14 - 16 hours until it is ripen.

Mixing: When the sourdough is ripen (it will be dome on top). Add all the ingredients to the mixing bowl, except walnut and raisins.  Mix until the ingredients are incorporated. Leave it to autolyze in a bowl covered with plastic bag or wrap for 15 minutes.

Sprinkle salt over the dough surface and mix on the first speed for 3 minutes and continue mixing on second speed for further 3 – 4 minutes, until a strong gluten development is achieved (the dough can be stretched gently until you can see the transparent membrane and dough doesn’t tear).

Gently mix walnuts and raisins through the dough. Desire dough temperature is 80°F/26°C.

Baking: Preheat the oven to the highest temperature and prepare the oven steaming.