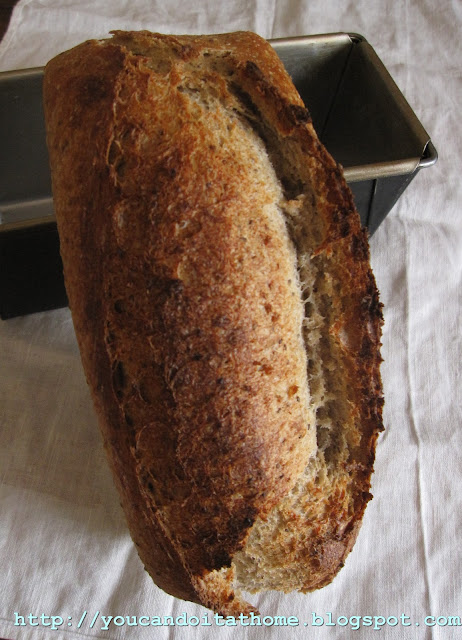 Another weekend baking with light rye bread and continue keeping with 20% rye flour.

Last week's light rye bread with overnight retardation (chilling the shaped doughs in the fridge overnight to slow down fermentation) yielded too acidic loaves to my liking. So, this week I used the white starter instead of rye starter in the recipe, which I was hoping to reduce the acidity (sour taste).

I also added chia seeds into the dough as I planned to give some of the bread to S'mom when she came over. We were introduced (or heavily convinced) to the chia seed goodness by her. Apparently, this seed is a super food. It is rich in omega-3 fatty acid, protein and fibre. She gave us a big bag and tried to convert us into chia seed devotee.

I soaked the seeds with 1.5 part of water (1 g seed:1.5 g water). The seeds appeared to soak up all the water and became thick jelly paste. It was impossible to drain any water out of the seeds.  The dough became really wet after the seeds were incorporated (I mixed the seeds in after the gluten has developed). As a result, I had to do the stretch and fold in the bowl (to strengthen the gluten structure further). I also had a slight (very slight) trouble shaping this rather wet dough. Shaping the wet dough is always a bit of a challenge. It was a challenge to create enough surface tension without tearing the dough surface. I tried not to add too much flour and brushed the excess flour whenever possible.

﻿ ﻿
I baked one loaf in a pan and the other as a freestanding loaf. The level of oven spring was clearly visible at the one baked in loaf pan. The crust colour was virtually different between two sections, the bottom and the top bit (pale colour on the section of original dough volume and dark colour on the oven spring section). It was interesting to see how much volume the dough has gained after the bake.

﻿ ﻿﻿﻿﻿ ﻿﻿﻿
I also tried a new oven steaming method recommended by Chad Robertson in Tartine Bread book (baguette recipe section). Mr Chad suggested placing soaking wet tea towel in a baking pan at the bottom of the oven when it is pre-heated. I also added about half-cup of water into the towel tray twice during the first 10 minutes of baking. The towel tray was removed after first 15 minutes. I also combined this steaming towel with my usual boiling water with pre-heated cast iron pan. It created so much steam that the smoke alarm went off! The alarm was off a few times when I opened the oven to pour more water into the towel. I think I would have laughed at myself if I happened to videotaping my actions. I was jumping onto the kitchen bench with my kitchen towel, waving away the steam from the smoke alarm. The alarm stopped. I stopped waving the towel. The alarm went off again. Waving towel again. Stopped, and sitting on the bench, swinging my legs and wait to see if the alarm would be off again. You know how smoke alarm can be really loud and so alarming.


I love this new steaming method. It provided better loaf volume and shinier crust. It also removed the need of constant spraying the oven for the first 10 minutes (it also means no open-and-close the oven every minute for spraying and the oven heat was more contained).

﻿ ﻿ The bread was nice and moist which gave a great chewy crumbs. It was mouthful and a pleasant to eat. I believe that the gel-texture of chia was turned into liquid and got absorbed in the crumb and contribute to the softer bread texture. Chia seeds also gave a slight crunch and texture to the bread. The bread got just-right sour taste, not too acidic. I think by using white starter instead of rye starter gave less sour flavour. Personally, I think using rye starter at 20% rye percentage bread with overnight retardation would yield too sour a bread for me. If I am to continue retarding my dough with 20% rye flour and over, I would use the white starter instead of rye starter. However, this is my personal preferences. I like this flavour profile (with white starter) better. It has the sweet and nuttiness from wheat and slight acidity and earthiness from rye.
﻿ ﻿

A quick notes from this week's bake:


·         Sourdough bread with 20% rye flour using white starter instead of rye starter
·         New steaming method, a tray of wet towel placed in the oven while it was pre-heating. It provided much more streams, great oven spring and shinier crust.
·         Chia seeds turned into gel-paste after being soaked and contributed to very moist crumbs. The bread was lovely with a chewy tender crumbs.
·         I bake two loaves, with one in the pan and the other free-standing, at the same time with the same temperature. The pan-loaf weighted 1.3 kg (before baking).  As you might have guessed, the pan-loaf got softer crust. Given that it is a lean bread, without fat and sugar, it got rather pale crust. I generally like crusty bread. However, it is such a nice change to have soft bread with soft crust. It’s nice to give my jaw a break sometimes.
·         I also baked them slightly longer due to its high liquid percentage.
Here is the recipe…

Prepare soaker: Mix chia seeds with water about 12 – 18 hours before the baking. Let it sit in a covered container at room temperature.

Mixing: Add all the ingredients to the mixing bowl, except salt and soaked chia seeds.  Mix until the ingredients are incorporated. Leave it to autolyze in a bowl covered with plastic bag or wrap for 15 minutes.

Sprinkle salt over the dough surface and mix on the first speed for 3 minutes and continue mixing on second speed for further 3 – 4 minutes, until a strong gluten development is achieved. If mixing by hand, it would take approximately 15 – 20 minutes to have a well gluten development. Desired dough temperature is 80F/26C

Mix chia seed soaker through until they are well-incorporated into the dough.

Bulk fermentation: - Leave the dough in a lightly oiled container and cover the bowl with plastic bag or wrap for 2 – 2.5  hours. Do the stretch and fold twice at 50 minute and 100 minutes (every 50 minutes intervals).

Baking: take the doughs of the fridge. Let them sit at room temperature to continue its proofing. This will take between 1 –2 hours depending on the room temperature. In the meantime, preheat the oven to its highest temperature.

Bake at 240°C (460°F) for 15 minutes with steam, then lower the temperature to 225°C (440°C) and bake for another 25 – 30 minutes.
Leave the loaves to cool down in the oven with the door ajar. This is to help the bread drying out thoroughly with its internal moisture.
Submitting this post to YeastSpotting.
.
Posted by Sue at 11:57 PM