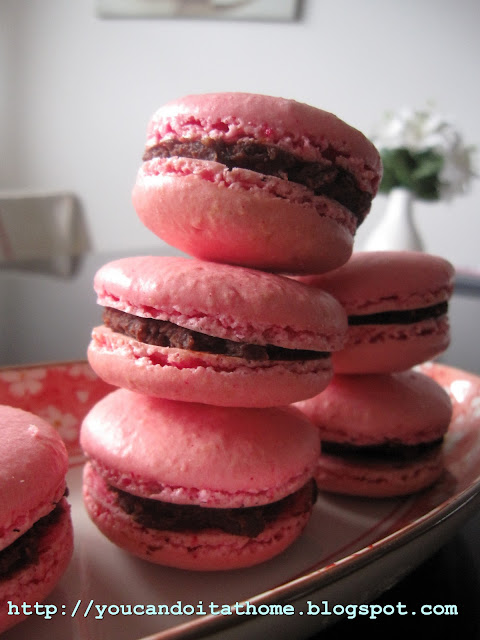 Cherry Ripeâ is one of my favourite chocolate. This chocolate could potentially be available only in Australian and New Zealand. I never came across this bar before until I came to Australia. It is made by Cadbury Chocolate and made of juicy cherry and coconut wrapped in dark chocolate.
I love creating macaron flavours. I think about macaron concoctions continuously, non-stop. One of the flavours that I like to think about is the replication of chocolate bar. Think about famous chocolate bars like Snickers (caramel, peanuts, chocolate), Toblerone (chocolate, almond, nougat), Mars (caramel, chocolate). There are reasons why they are so popular and classic hits. It’s because the combination of flavour works. It stands the test of time. Instead of inventing your own flavour and invest in the trial-and-errors of flavour combination. It’s a short-cut to borrow the idea from what is proof to be a successful concoction.
I got a bag of unopened organic desiccated coconut that was going to expire in a month. As I hate throwing away food, there’ll be more baking with coconut on the way.
I love opening a new packet of coconut. The aroma is sensational. It transports me back to the streets of Thailand. I can picture the street stalls selling sweets, puddings, or even grilled satay chicken. It smells deliciously sweet, creamy and toasty. It wows me every time.
To replicate Cherry Ripeâ flavour, there were three ingredients that came to my mind. As you might have guessed, they were coconut, cherry and dark chocolate, which I combined them into the macaron filling. I also added ground desiccated coconut into the macaron shell mixture as well (I grind them in a food processor). My house smelt fantastic when the macarons were being baked.
I took some of the macarons to work and my workmate named the flavour straight away that it was Cherry Ripeâ. Maybe she was good with the flavour or maybe it is an Aussie icon thing that people will be able to sense it from miles away. It also meant that my macaron turned out to be something I intended to. Quite happy with that! 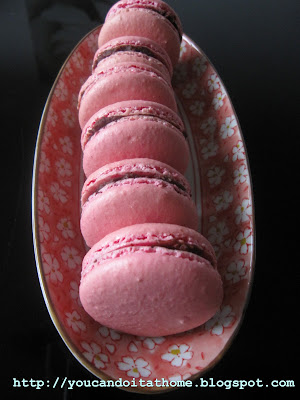 Here is the recipe….

Divide egg whites into two equal portions (50 g each portion).  Pour the first portion of egg white (50 g) and red colouring powder or liquid into the almond meal/icing sugar mixture.  Don’t mix or stir them, just leave it as is.

Continue mixing until the meringue cool down to slightly above body temperature (50°C) or when the side of the mixing bowl is warm to touch. The whipped egg white will be (very) stiff and glossy.

Put the mixture into a piping bag fitted with 1-cm plain tip (size #11). Pipe the staggering rows of 1-inch rounds onto baking papers or baking sheets. You will need two trays for this recipe.

Store macarons in a covered container in a fridge. Macarons will taste better after they are chilled overnight. 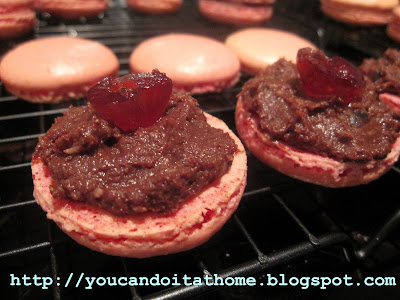 Grind glace cherry with desiccated coconut in a food processor, until roughly chopped. Set aside. 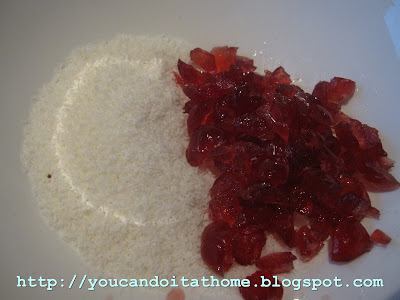 Bring cream to the boil in a small saucepan over medium heat. Remove it from heat as soon as it comes to the boil.

Pour hot cream into chocolate. Leave it for about 10-20 seconds. Stir the chocolate and cream mixture until melted. Scatter butter pieces on the mixture and stir until well combined.

Mix in cherry and coconut mixture until all combined.

Chill the ganache at least an hour before using. 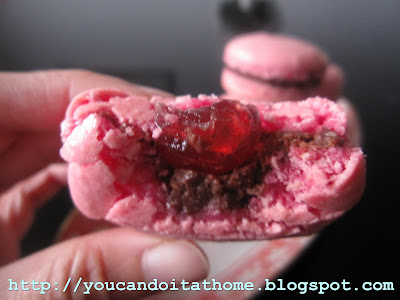