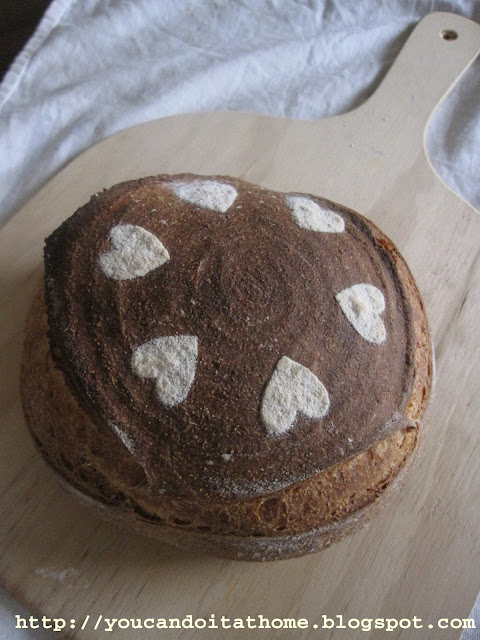 This bread was inspired by a post at Wild Yeast Blog (and also my inner frugality and curiosity) about incorporating old bread that was turned into bread crumbs into the dough. The idea is also based on the bread-making wisdom that old bread will improve bread flavour and its keeping quality.
I love the idea that instead of throwing stale bread away, I can make the use out of it. The piece that was destined for the bin or compost could potentially improve the bread flavour and texture. It is a fabulous idea.
I had a small piece of sourdough corn bread left over from two weeks ago that I have put them aside in the fridge. I chopped it into one-inch pieces and process them in food processor to get the breadcrumb (it was about 90 grams, or 10% of total flour weight).
The bread is fully loaded with corn. It has 20% polenta flour (cornmeal), 19% coarse polenta and 10% cornbread breadcrumbs in it (all percentage are measure against total  flour in the recipe. It’s called “Baker’s Percentage”). I also added some honey and butter to enhance the bread flavour and texture.

The bread tastes absolutely wonderful. It is a really yummy bread. It is simple on its own and even better with butter. It has an outstanding aroma  and mild sweetness from corn and honey. The aroma is even stronger when toasted. The texture is also different from my normal sourdough. It is dense, yet soft, moist and chewy. I suppose that butter contributes to the softer texture. However, I was surprised that 5% of butter can do so much. It made me wonder if polenta/cornmeal has something to do with the softer crumb. 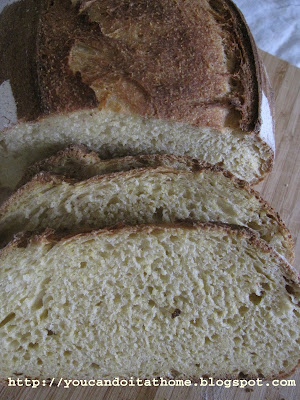 Comparing the same loaves baked at different occasions, with old breadcrumbs, and without, I think that the one with old breadcrumb taste better. For the better keeping quality part, I will never know, as we finished two loaves in four days. 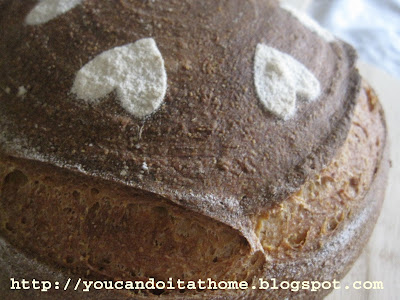 I also made the heart stencil onto the bread to get into the theme of Valentine’s Day. I got a cake stencil pack from Daiso shop ($2.80 shop from Japan).  It has about 5 different stencil designs in the pack, including hearts. I have also included how to do the stencilling after the bread recipe. Amazon also has a great selection of bread stencilling tool. 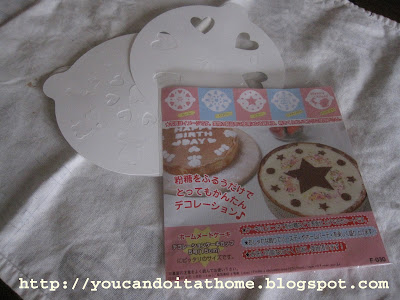 1. You might have to adjust the water in the recipe due to the added breadcrumbs. I had to add about two tablespoons of water to adjust the dough consistency.
2. Because cornmeal doesn't contain gluten, the dough won't have a good gluten development. I stopped kneading when I almost achieved medium gluten development,which take about 30 minutes kneading by hand. It was when I can partially stretch the dough without tearing it.
3. I left the dough to autolyze for 30 minutes.
4. The dough was retarded overnight in the fridge.
5. I did two stretch-and-folds, during two-hour bulk fermentation, i.e. first fold at 40 minutes and second fold at 80 minutes. 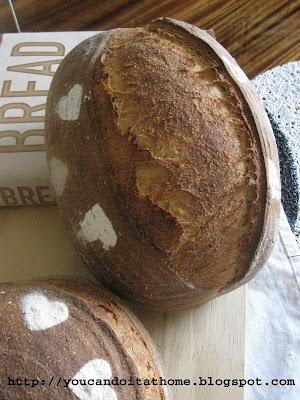 Sourdough Corn Bread with Old Bread Recipe
Make 2 large loaves
Liquid Levain build
Bread flour 136 g
Water 188 g
Mature culture (liquid)  28 g
Soaker
Polenta (coarse polenta) 170 g
Water 227 g
Final Dough
Bread flour 591 g
Cornmeal (also known as polenta flour and maize flour)  226 g
Old bread, crumbed 90 g
Water 662 g
Butter 45 g
Honey 45 g
Salt 18 g (1 tablespoon)
Soaker all of the above
Levain all less 2 tablespoons
METHOD
1.    Liquid-levain build: Make the final build 12 - 16 hours before the final mix.  Keep it in the covered container and stand at the room temperature.
2.   Soaker: Make the soaker at the same time when making levain build. Pour the water (or cold water) over polenta and mix thoroughly. Put it in a covered container and sit at room temperature.
3.  Mixing: Add all the ingredients to the mixing bowl except the salt. Mix or stir the ingredients together until it becomes a shaggy mass. Cover the bowl with cling wrap or plastic bag and let it stand for an autolyse phase for 20 -60 minutes. At the end of the autolyse, sprinkle the salt over the surface of the dough and mix on a medium speed for 3 -5 minutes until the medium gluten development is achieved. I mixed by hand and it took about 30 minutes..
4.  Bulk fermentation: 2 hours. Cover the bowl with plastic bag or wrap and sit at room temperature for 2  hour. Do two stretch-and-folds at 40 mins, and 80 mins.
5.  Folding: Two stretch-and-folds at 40 minutes interval (i.e. at 40 minutes, and 1 hour 20 minute).
6.  Dividing and shaping: Divide the dough into two equal pieces, pre-shape the dough into round. Cover the dough with tea towel and let it rest for 15 minutes. Final-shape the dough into either oblong (batard) or round (boule).
7.  Final fermentation (proofing): Approximately 1 ½  hour or retard the loaves in the fridge overnight.
8.  Baking: with normal steam, 235C for 40 45 mins, turn the loaves half way through the bake. (I retarded the dough and took it out in the morning. I then let it rest at room temperature for about an hour. In the meantime, I preheat the oven for about an hour to heat up the baking stone).
Stencilling the bread:
Remove the proofed dough from proofing basket and mist the dough surface lightly with water.
Put the stencil pattern on top of the dough, using a small sifter to sift flour onto the pattern.
Remove the pattern and bake the bread as normal.
Submitting this post to YeastSpotting.
Posted by Sue at 9:07 PM