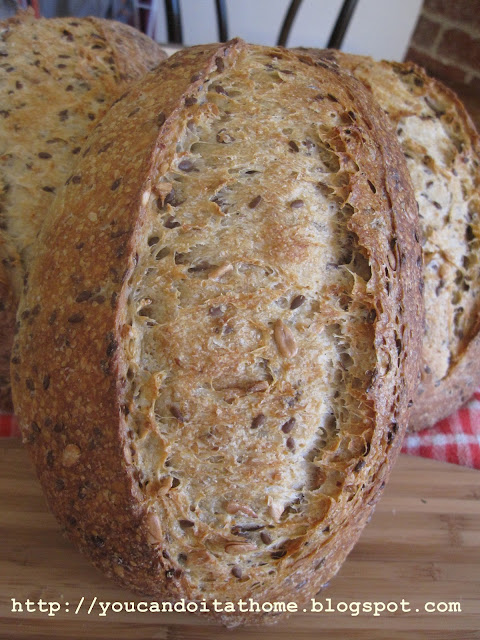 I came across burghul (also known as bulghur) at the grocery section of Oasis Bakery. The name was really familiar and I remembered vaguely from the bread-making book that it was grain. So, I bought a small tub hoping to try using it with my grain bread. 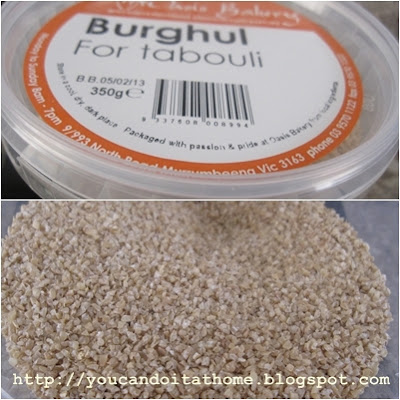 Burghul is most known as Bulghur. It is a cereal food made from several different wheat species, most often from durum wheat. Its use is most common in Middle Eastern cuisine and in Greece (from Wikipedia).
I also like to think of it as a partially-cooked cracked wheat. It is whole grain and full of fibre. I wanted to try adding it to the grain-bread, and five-grain levain (sourdough) from Jeffrey Hamelman’s Bread cookbook is on my agenda.
Grain-bread tends to be the bread I make most often, not intentionally, but I just seem to be wired for it.
I did some research on Google about burghul in bread as well as flipping through my bread making cookbook (Reinhart’s and Hamelman’s). I didn’t find much useful information (must I say, it’s almost ZERO information).
As it turned out, burghul is widely known more as bulghur than burghul. When I did searches on bulghur, it has returned a large amount of relevant and useful information. However, I only did this after I finished with my bake and was very curious about this grain.  Which, I will now refer to this grain as “bulghur”. So, I bakeE with bulghur without having enough information on how to handle it correctly.  In fact, there are useful discussions about bulghur in The Fresh Loaf specifically for Hamelman’s Five-Grain Levain bread, the bread I was working on. Had I searched The Fresh Loaf about the bulghur (not burghul, sorry if this sounds confusing), I would have had enough valuable information to work with. Why didn’t I do that, I will never know.
I substitute cracked rye in the recipe with bulghur and keep it as hot soaker (i.e. soaking grains and seeds by hot water for 12-16 hours) as I figured that I should treat bulghur as cracked wheat.  In fact, if you want to keep its slight crunchy texture, you should soak it in the cold water instead. And it’s what I should have done.
However, hot soaker also worked fine. But I just prefer the bulghur not to be mushy and blend into the bread like it was with the hot soaker.
Given that a lot of water was absorbed into bulghur (with hot soaker), the dough felt stiff, yet sticky. I had to add about 2 tablespoons more water to adjust the dough consistency. Again, I believe the stickiness might have come from mushy bulghur. If I am going to make bread with bulghur again, I would definitely soak it in cold water as I believe it will give a nicer texture and easier when it comes to dough handling.
The bread is very moist and a little dense. I found the crumb is also tighter than my previous  five grain levain bake. I think that the cooked and mushy burghul played the part in the tighter crumbs. The grain flavour seems to be dominated by sunflower seeds in the grain mix. Its aroma came through every time I bit into the bread, which is really nice.  The bread also has nice texture from the flaxseeds and sunflower seeds. I couldn’t taste the bulghur but it definitely added texture, moisture and chewiness to the bread. 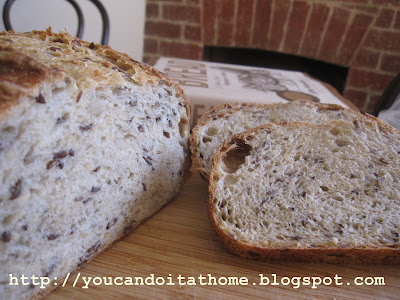 All in all, this bread is my all-time favourite. It never disappoints. It is full of flavour an texture, not to mention its goodness from the wholegrain. Highly recommend for the multi-grain bread lover.
This recipe made three medium size loaves, which I also gave one loaf to S’ Mom when we went over for dinner at her house. 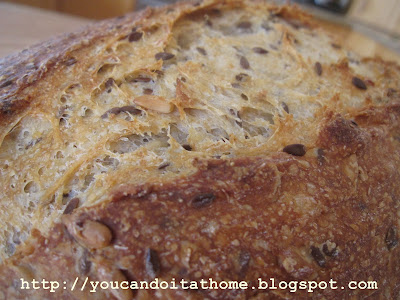 Here is the recipe and a short note on my sourdough processes.
Recipe note:

1. I left the dough to autolyze for 30 minutes after initial mixing.
2. The dough (shaped loaves) was retarded overnight in the fridge
3. I did one stretch and fold during 1.5 hours fermentation.
4. I have left the yeast out of the recipe as I retarded the dough overnight. But if you want to bake without retarding, you can add 1 teaspoon of instant yeast and reduce the fermentation time by half an hour. 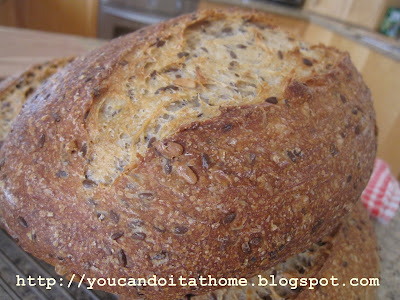 Five-Grain Levain (sourdough) recipe
From Jeffrey Hamelman’s Bread: A Baker's Book of Techniques and Recipes
Make 3 medium loaves
Overall formula
Bread flour 680 g
Whole wheat flour 226 g
Bulghur 82 g
Flaxseeds 82 g
Sunflower seeds 71 g
Oats 71 g
Water 890 g
Salt 22 g
Yeast 2 g
Total 2.13 kg
Liquid Levain build
Bread flour 226.8 g
Water 283.5 g
Mature culture (liquid)  45 g
Soaker
Bulghur 82 g
Flaxseeds 82 g
Sunflower seeds 71 g
Oats 71 g
Water, boiling 400 g
Salt 5 g (1 teaspoon)
Note: You can also make cold soaker by using cold water instead of hot water if you prefer to have the slight crunch from bulghur and not into a moist bread.
Final Dough
Bread flour 453 g
Whole-wheat flour  226 g
Water 250 g
Salt 17 g (1 tablespoon)
Yeast 1 teaspoon, instant dry (you only add this if you don’t retard the dough)
Soaker all of the above
Levain all less 3 tablespoons
Baker Percentage
Bread flour 75%
Whole wheat flour 25%
Bulghur 9.2%
Flaxseeds 9.2%
Sunflower seeds 7.7%
Oats 7.7%
Water 98%
Salt 2.5%
Yeast 0.8% (optional)
Total 235.1%
METHOD
1.    Liquid-levain build: Make the final build 12 - 16 hours before the final mix.  Keep it in the covered container and stand at the room temperature.
2.   Soaker: Make the soaker at the same time when making levain build. Pour the boiling water (or cold water) over the grain blend and salt, mix thoroughly. Put it in a covered container and sit at room temperature.
3.  Mixing: Add all the ingredients to the mixing bowl except the salt. Mix or stir the ingredients together until it becomes a shaggy mass. Cover the bowl with cling wrap or plastic bag and let it stand for an autolyse phase for 20 -60 minutes. At the end of the autolyse, sprinkle the salt over the surface of the dough and mix on a medium speed for 3 -5 minutes until the medium gluten development is achieved. I usually mix by hand and it takes about 15 -30 minutes depending on my speed on the day.
4.  Bulk fermentation: 1 to 1 ½ hours or 2 hours if the dough is retarded overnight.
5.  Folding: If the fermentation is 1 ½ hours, fold once after 45 minutes.
6.  Dividing and shaping: Divide the dough into three equal pieces, pre-shape the dough into round. Cover the dough with tea towel and let it rest for 15 minutes. Final-shape the dough into either oblong  or round.
7.  Final fermentation (proofing): Approximately 1 hour or retard the loaves in the fridge overnight. If you retard the loaves, omit the yeast in the recipe. 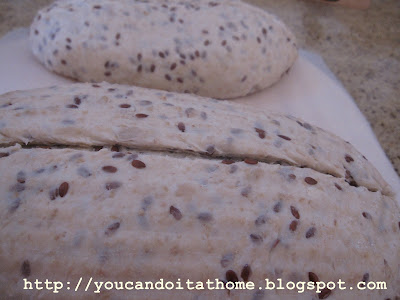 8.  Baking: with normal steam, 235C for 40 45 mins, turn the loaves half way through the bake. (I retarded the dough and took it out in the morning. I then let it rest at room temperature for about an hour. In the meantime, I preheat the oven for about an hour to heat up the baking stone). 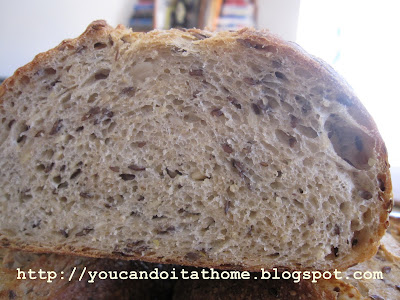 Submitting this post to YeastSpotting.
Posted by Sue at 11:13 PM