Cranberry and Walnut Sourdough - full of flavour and texture 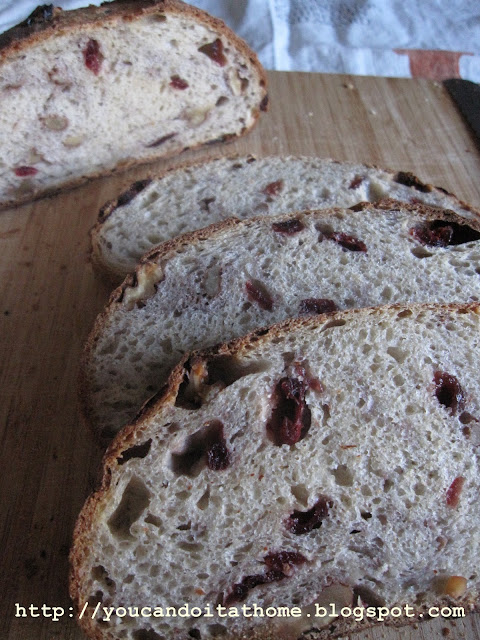 Every now and then, I take a break from making multigrains bread  and turn to making fruit breads. I also have a tendency to try new recipes (almost) everytime I'm making breads. I suppose it is because I'm still relatively new to bread making and I love to explore and try new recipes.

I have been wanting to try incorporating walnuts into sourdough for quite sometimes. Many TFLers (The Fresh Loaf members) raved so much about walnut breads. This weekend was the weekend I was going to try walnut sourdough. I also like the idea of fruit and nut bread. In my opinion, fruit and nut complement each other well in bread. They are the blend of flavour and texture.

For some reasons, I wanted to try using cranberries in the fruit bread. I never baked or cooked with cranberries before and I was curious what it tasted like. So, cranberry and walnut sourdough that is, for this weekend's menu.

I adapted the recipe from Jeffrey Hamelman's Prune and Hazelnut Sourdough from Bread: A Baker's Book of Techniques and Recipes. This is the recipe I used quite a few times, with my own fruits and nuts adaptation. I have tried fig and hazelnuts, fig and almond, and this time cranberry and walnuts. Funny enough (or strange enough), I never made it with prune and hazelnut as the recipe suggested, maybe next time.

The recipe always delivers great result. It has 25% wholewheat flour, 5% butter and 12% of dried fruits and 12% of nuts (notes: all recipe percentage is measure against the total flour in the recipe, it's called Bread Baker's Percentage). 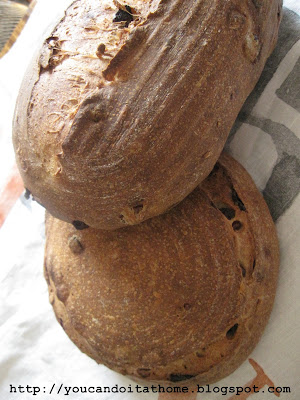 Cranberries and walnuts works well together. Dried cranberries added moisture, and slight sweet and sour taste to the bread, whereas walnuts added the crunch to the texture. We enjoyed the bread. It made nice fruit toast. It was also a nice change from golden raisin fruit toast to cranberry's. I also made orange butter to go with it. The butter was very easy to make and it added great flavour to fruit toast (and/or muffin). 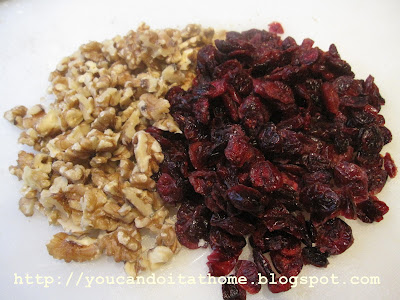 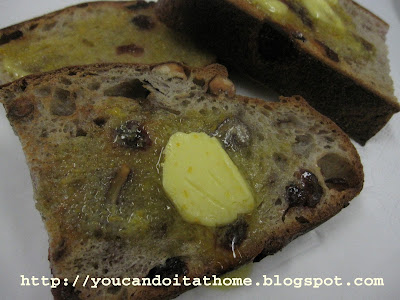 Here is the recipe and a short note on my sourdough processes.
Recipe note:

1. I left the dough to autolyze for 30 minutes after initial mixing.
2. The dough (shaped loaves) was retarded overnight in the fridge.
3. I did one stretch and fold during 2 hours fermentation.
4. I have left the yeast out of the recipe as I retarded the dough overnight. But if you want to bake without retarding, you can add 1 teaspoon of instant yeast and bulk ferment the dough for 1 – 1.5 hrs.
5. Cranberries and nuts were incorporated into the dough after the dough was kneaded and medium gluten development was achieved.
6. The dough will be somewhat wet before cranberries and walnuts were added. Dried fruits and nuts will absorb some moisture from the dough after they were added.
Cranberry and Walnut Sourdough recipe
Adapted from Prunes and Hazelnut bread recipe From Jeffrey Hamelman’s Bread: A Baker's Book of Techniques and Recipes
Make 2 large loaves
Overall Formula
Stiff Levain build
Bread flour 181 g
Water 113 g
Mature culture (liquid)  37 g
Final Dough
Bread flour 499 g
Whole-wheat flour  227 g
Water 504 g
Salt 17 g (1 tablespoon)
Butter 45 g, softened
Walnuts 110 g, chopped coarsely
Dried cranberries 110 g
Yeast 1 teaspoon, instant dry (omit this if you retard the dough overnight)
Stiff Levain all (less 37 g)
METHOD
Stiff-levain build: Make the final build 12 hours before the final mix.  Keep it in the covered container and stand at the room temperature.
Divide the starters into 10 pieces and sprinkle some flour over so that they are not stick to each other.

Add all the ingredients to the mixing bowl except walnuts, cranberries and salt. Mix or stir the ingredients together until it becomes a dough ball. Cover the bowl with cling wrap or plastic bag and let it stand for an autolyse phase for 20 -60 minutes. The dough will be somewhat sticky. Dried cranberries will absorb the moisture once they are mixed through. 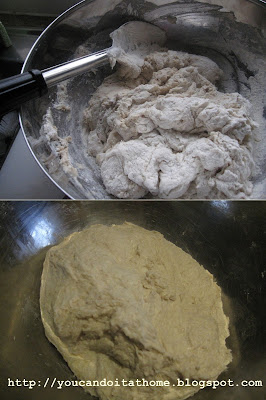 At the end of the autolyse, sprinkle salt over the surface of the dough and mix on a medium speed for 3 -5 minutes until the medium gluten development is achieved. I usually mix by hand and it takes about 15 -30 minutes depending on my speed on the day.
After gluten is developed, mix walnuts and cranberries into the dough on a low speed until they all combine.
Place dough in an oiled container and cover the bowl with plastic bag or cling wrap. Leave it for bulk fermentation 1 to 1 ½ hours or 2 hours if the dough is retarded overnight.
Folding: If the fermentation is 1 ½ hours, fold once after 45 minutes. If the fermentation is 2 hours, fold once after an hour.
Dividing and shaping: Divide the dough into two equal pieces, pre-shape the dough into round. Cover the dough with tea towel and let it rest for 15 minutes. Final-shape the dough into either oblong (batard)  or round (boule).
Final fermentation (proofing): Approximately 1 hour or retard the loaves in the fridge overnight. If you retard the loaves, omit the yeast in the recipe.
Baking: with normal steam at 235°C for 40 - 45 mins. Turn the temperature down to 225°C after 20 minutes. Turn the loaves half way through the bake for equal browning. (I retarded the dough and took it out in the morning. I then let it rest at room temperature for about an hour. In the meantime, I preheat the oven for about an hour to heat up the baking stone).

This post is submitted to YeastSpotting.
Posted by Sue at 5:06 PM