I always thought I know my own oven. I even have an oven thermometer to measure the actual temperature inside the oven and don't go by the oven's temperature gauge alone. My pies, tarts, cakes, macarons, and breads (?) turn out alright usually. Usually? Usually? Well, most of them are sort of alright, except 'breads'.

I always wondered why I didn't have a nice and big oven spring on my loaves like others on The Fresh Loaf. And I usually put this down to baking stone (they've got thicker ones), steaming techniques (they've got better techniques). Or it's The Fresh Loaf syndrome where you spent a lot of the time on the site and saw great results from other TFL members and made you feel like you wanted to strive for those great result too...and that your breads were just not good enough. 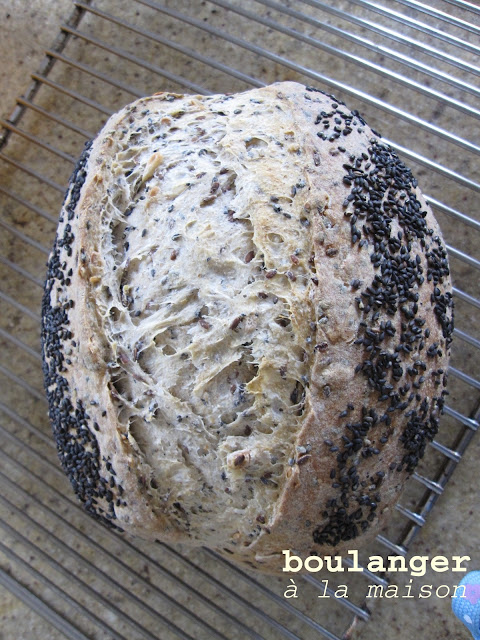 My reasoning had always been those. Until I discovered, just out of curiosity (I know, the curiosity came a little late...it was defeated by my complacency), what symbols of each baking method on the oven gauge actually meant (I don't have the oven manual and never try to locate one as I think, yes, I know the oven) by reading the oven manual on the Internet. Then, I realised that I had it wrong all along. 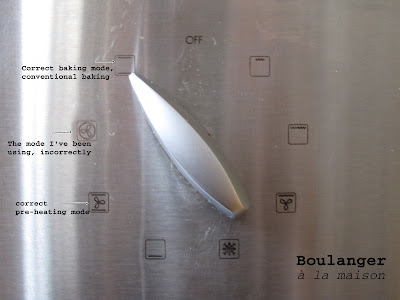 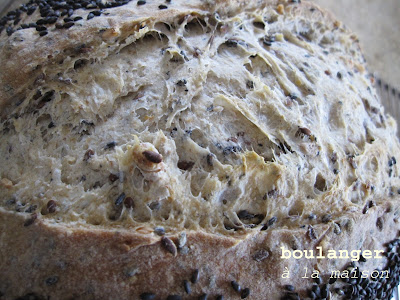 Nice ears
These loaves, Jeffrey Hamelman's sourdough seed bread from Bread cookbook were made last weekend, with a proper baking mode(at last!). They were the best oven spring and nicest ears I had so far with my simple oven steaming technique (nothing fancy, just a cast iron pan filled with boiling water and spraying the oven for first 5-7 mins with 1 minute interval).

They are one of my favorite breads from the book. I love the texture and nuttiness from sesami and sunflower seeds. Plus, it also gots nutritious flaxseeds. So, it's a tasty and healthy choice. The bread is also quite moist. It contains about 8% rye flour which contributes to the mild sour taste.  It is also great toasted as it brings out the aroma from sesame seeds even more.

I toasted the sesame seeds and sunflower seeds on the pan over low heat instead of using oven as suggested by Hamelman. It worked fine for me. I chose this method as I get more joys of the cooking from getting my hands on things, like shaking the pan and tossing the seeds.


This post is submitted to YeastSpotting at Wild Yeast Blog


1. Making the levain build 12-18 hours before making a final dough. Mix it until it's all combined and leave it in a covered container at room temperature.

2. Making the soaker at the same time of levain build and put it in a covered container.

3. Final dough: mix  all the ingredients together, except salt, until all flour is hydrated. Cover the bowl with plastic wrap or bag and sit at room temperature for 30-60 minutes (to autolyse).

4. Sprinkle salt over the dough. Knead the dough by hand for 15-30 mins (depending on your speed and strength) or by mixer on the first speed for 3 mins, followed by second speed for futher 5-10 mins. The dough should have a medium gluten development.

5. Bulk ferment the dough in a bowl covered with plastic wrap or bag for 2.5 hours, with one or two folds during ferementation (if doing one fold, do it after 75 mins. If doing two folds, doing each fold with 50 mins interval).

6. Divide the doughs into two equal portions. Shape the dough into either boules or batards.

7. Retard the dough in the fridge overnight (you can also bake the breads on the same day by adding one teaspoon of instant yeast during mixing the final dough. Proof the shape loaves for about 1.5-2 hours, until almost double in size). 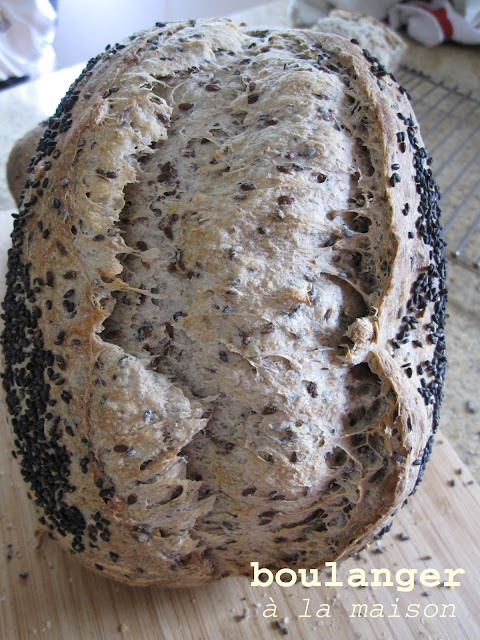 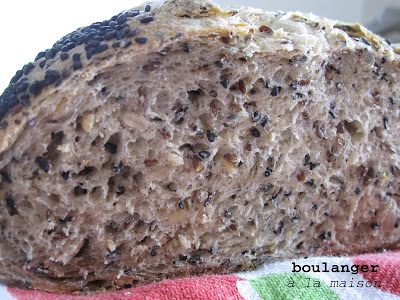 I'm quite happy with the crumbs. The bread has a mild sour taste, which could be a result of rye flour. 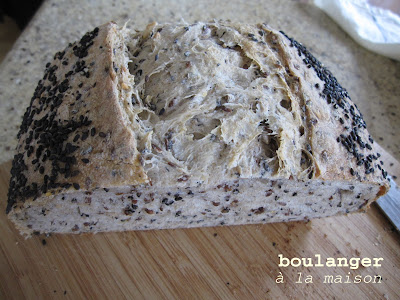