Sometimes, all you need is a plain sourdough and a splash of olive oil, maybe some dukkah thrown in.

The plain sourdough bread, i.e. without fruits, grains or any derivatives, is something I try to make more often and manage to forget to make it. Not that I don’t like plain sourdough, I just seem to get distracted by other concoctions and the idea that breads with grains or fruits are more interesting and tastier. Every now and then, I would just realize that I haven’t made the plain sourdough bread for a while, or sometimes S would remind me and make a request for it. 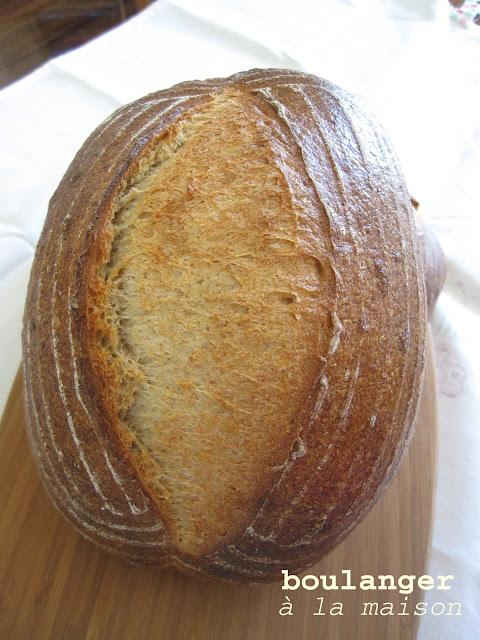 Well, one should expand one’s horizon a little and venture into the new plain sourdough territory. Flipping through Hamelman’s Bread cookbook, I came across Pain au Levain with whole wheat flour, which looked quite interesting. The recipe has slightly higher levain percentage, 20% versus 15% in other recipes. It contains mixed flour (rye and bread flours) in stiff levain build. It also has 20% whole wheat flour in the recipe. 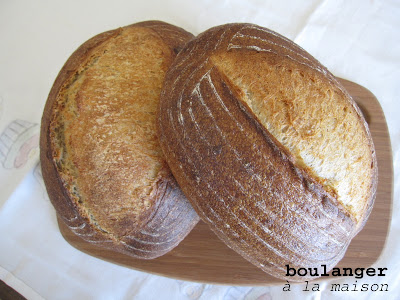 This recipe also serves another purpose. As the recipe calls for stiff levain, it is a good timing that I can convert my liquid starter (100% hydration) to stiff starter (60% hydration) before I am going away in the next two weeks for a month and won’t have chances to feed my lovely pet starter, Jerry. I was afraid that he would be starving (for flour and water) and pass away while I’m away.
Thanks to a post on The Fresh Loaf about the sourdough starter feeding. Apparently, stiff starter is more resilient than liquid one. It is more likely that it will survive after not being fed for a while. I only need to feed Jerry a few times when I’m back from holiday to wake him up and come back to his cheerful and active self.
The bread has a pronounced sour flavour to it due to the stiff levain used and a small amount (6.5 %) rye flour in the levain. The bread achieved a good volume with a good oven spring. The crumb is moist and chewy, slightly chewier than usual. This bread works well with olive oil and dukkah (Middle East spice and nut mix).

The bread bottom was not as brown as I would have liked but the crust is shiny. It is probably the shiniest crust I had so far. This could be a result of too long an oven steaming. I got distracted and left the steaming for about 5-10 too long (I filled the cast iron pan with boiling water three times and left  the pan in steaming on for about 20 mins).
﻿ ﻿
Recipe note:

1. Stiff-levain build: Make the final build approximately 12 hours before the final mix.
2. Mixing: Add all the ingredients to the mixing bowl except the salt and levain. Mix or stir the ingredients together until it becomes a shaggy mass. Correct the hydration as necessary; the addition of a bit more water may be necessary depending on the absorption of the whole-wheat and rye flours. The consistency of the dough should be medium - neither dry nor overly moist. Cover the bowl with plastic and let it stand for an autolyse phase of 20 -60 minutes. At the end of the autolyse, sprinkle the salt over the surface of the dough cut the levain into fist-sized chunks and place on top of the dough, and continue kneading until the medium gluten development is formed.

5. Dividing and shaping: Divide the dough into 2 equal pieces, make a pre-shape dough balls and let it rest on the bench for 10-20 minutes. Shape the doughs into round (boule) or oblong (batard).

6. Final fermentation; Approximately 2 -2 ½  hours (alternatively, retard for up to 8 hours in the fridge)