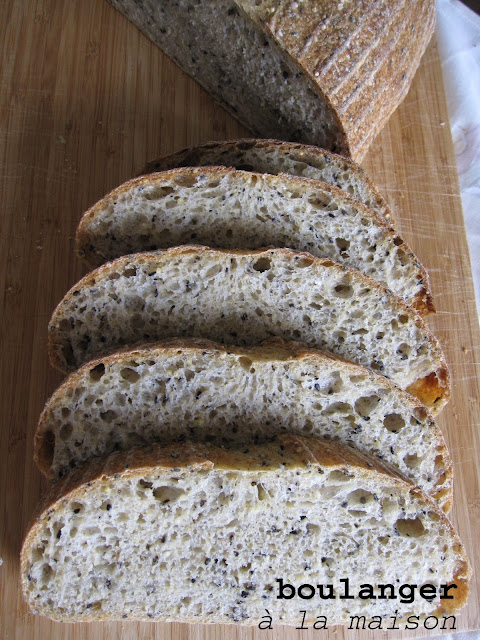 ﻿
I was running out the bread flour and didn’t want to buy a new 5-kg bag as I’m going away in a week. Looking through my pantry, it occurred to me that I have 4 bags of fine semolina in there. Perfect, semolina bread is on the menu this week.


Slightly off-track: I was in the quest to find the elusive durum flour and convinced myself that fine semolina was durum flour and ended up buying fine semolina every time I see  them without realising that I already had them in my pantry. That’s why I ended up with 4 bags! However, I made many loaves of semolina bread, where the recipe called for durum flour, using the fine semolina and they worked fine.

I came across semolina multigrain bread in Jeffrey Hamelman’s Bread: A Baker's book of techniques and recipes. The recipe calls for commercial yeast. I usually prefer to bake with wild yeast (sourdough starter) whenever I can so I converted it to sourdough bread using the stiff sourdough starter.


The recipe has 50% durum flour (which I substitute with fine semolina flour and it worked fine) and 50% bread flour. It has 20% grains consisting of polenta (coarse corn meal), millets and sesame seeds. I used mixed white and black sesame in the recipe.  Black sesame is very aromatic, more so than its white counterpart. Its aroma really comes through when you bite into the bread and it is even more so when the bread is toasted. 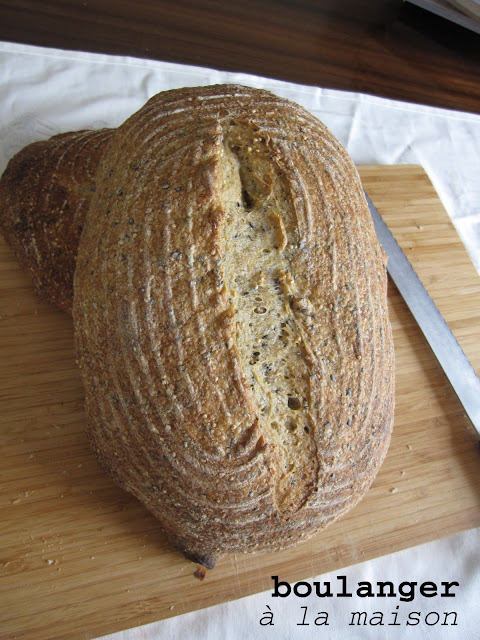 I found that semolina flour did not absorb the water as well as wheat flour. This could be because it is not flour, but more of fine coarse grain.  As of the result, the dough was quite wet to work with.

The crumb is soft, chewy and well opened. It is a very tasty loaf with an aroma of black sesame seeds, sweetness of polenta and slight crunchiness of millets. 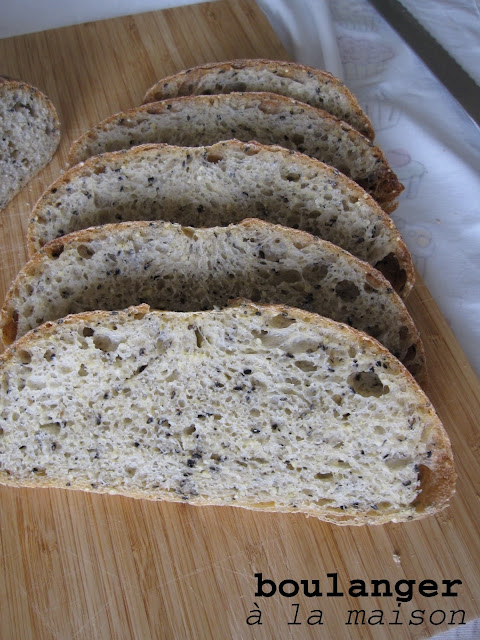 Now I only have three more bags of semolina to go and will start a fresh new bag of flour after my holiday. Good solution that ended up with such a tasty loaf.


Recipe note: 1. I left the dough to autolyze for 30 minutes.
2. The shaped loaves was retarded in the fridge overnight
3. Two folds, during 2 hours and a half fermentation
Semolina Multigrain Sourdough recipe
adapted from semolina multigrain bread from Jeffrey Hamelman's Bread: A Baker's book of techniques and recipes

1. Stiff-levain build: Make the levain build approximately 12 hours before the final mix.
2. Soaker: Mix all soaker ingredients at the same time when making levain build. Mix well and keep it covered at room temperature until required.
3. Mixing: Add all the ingredients and soakers to the mixing bowl except the salt and levain. Mix or stir the ingredients together until it becomes a shaggy mass. Correct the hydration as necessary. Cover the bowl with plastic and let it stand for an autolyse phase of 20 -60 minutes. At the end of the autolyse, sprinkle the salt over the surface of the dough and cut the levain into fist-sized chunks and place on top of the dough, and continue kneading until the medium gluten development is formed.

5. Dividing and shaping: Divide the dough into 2 equal pieces, make a pre-shape dough balls and let it rest on the bench for 10-20 minutes. Shape the doughs into round (boule) or oblong (batard).

6. Final fermentation; Approximately 2 -2 ½  hours (alternatively, retard for up to 8 hours in the fridge)