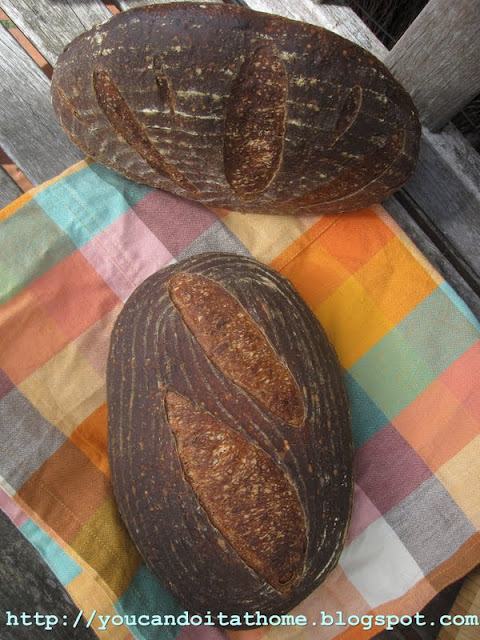 The recipe came from Dan Lepard’s The Handmade Loaf that I bought few months ago. I haven’t got around to bake anything from the book until now. Too many baked goods I want to try, so little time.
I made potato bread several times with mash potato and baked potato but never made one with grated potato which was used in this recipe. I was curious to find out. I was tempted to tweak the recipe a little by including rosemary, olive oil, nigella seeds and/or garlic as but I remembered the word of wisdom, “not to tweak the recipe when you make it the first time”. So, I struck with the recipe, well sort of. I replaced some of the bread flour (15%) with rye (5%) and whole wheat flour (10%). I also increased the hydration a little.
The dough was rather wet as grated potato continued to release its water into the dough which was somewhat a challenge to work with. I had to do stretch and fold in the bowl several times to achieve proper gluten development.  In hindsight, I should have struck with Lepard’s original hydration (50%) or may increase the hydration to 55% instead of 60% in this recipe. Umm, I just couldn’t help myself to tweak the recipe.
The bread was nice and moist. Grated potato was cooked and disappeared into the dough and gave the moisture to the crumbs. Honey (about 5% in term of Baker’s Percentage) gave slight hint of sweetness. The crust was browner than usual due to honey (I believe). The brown caramelised crust also added flavour to the bread. 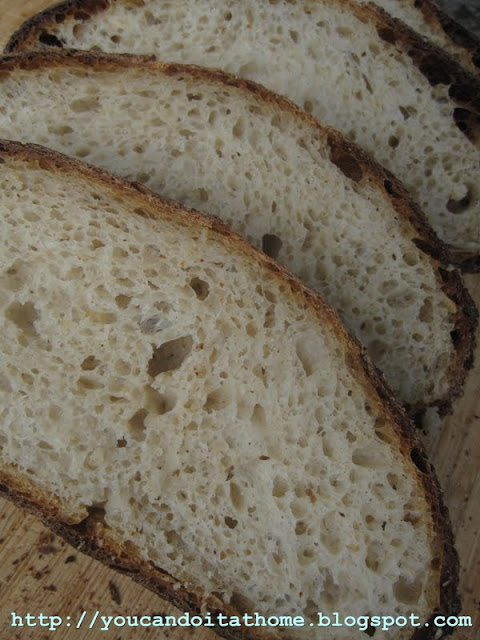 Side notes:
Because the water released/contributed from grated potato, it is a good idea to start the hydration at 50% (320 g) in the final dough and gradually adding/adjusting more water if needed. The dough should be just tacky, not wet, as the water will continue to come out of grated potato during bulk fermentation.
I used sourdough starter at 100% hydration (flour:water ratio = 1:1). The starter was built in three stages, with three feeding at 12 hours interval.
Crusty Potato Bread
adapted from Dan Lepard's Handmade Loaf

Mixing: Add all ingredients to the mixing bowl, except salt.  Mix until the ingredients are incorporated. Leave it to autolyze in a bowl covered with plastic bag or wrap for 15 - 30 minutes. Desired dough temperature 24C (76F).
Sprinkle salt over the dough surface and mix on the first speed for 3 minutes. Continue mixing on second speed for further 3 – 4 minutes, until a medium gluten development is achieved (the dough can be stretched gently, stay in piece and doesn’t tear).

I kneaded the dough by hand and it took around 10 minutes to get medium gluten development.
Bulk fermentation: - Leave the dough in a lightly oiled container and cover the bowl with plastic bag or wrap for 2.5 hour until doubled in size. Do stretch-and-fold twice at 50 minutes and 1 hr 40 minutes (50 minutes interval).
Divide the doughs into two or three equal portions. Pre-shape the doughs into rounds and let them rest for 10 – 15 minutes under a tea towel.
Shape the doughs into oblong (batard) or boule (round) and place into proofing baskets/bowls seam side up. Slip the proofing basket into a large plastic bag. Retard the dough in the fridge overnight or proof at room temperature for 2  hours or until almost double in size.
Note: I retard the dough at 10 C for 7 hours.
Baking: Preheat the oven to the highest temperature and prepare the oven steaming.

Bake at 235C for 10 minutes and reduce temperature to 225C and bake for further 30 – 35 minutes (baking with steam for the first 15 minutes).
Note: I usually leave the loaves to dry off in the off-oven with the door slightly open for 5-10 minutes. This helps the crust to brown up a little more and stay crisp for longer.
Submitting this post to YeastSpotting.
Posted by Sue at 12:08 PM