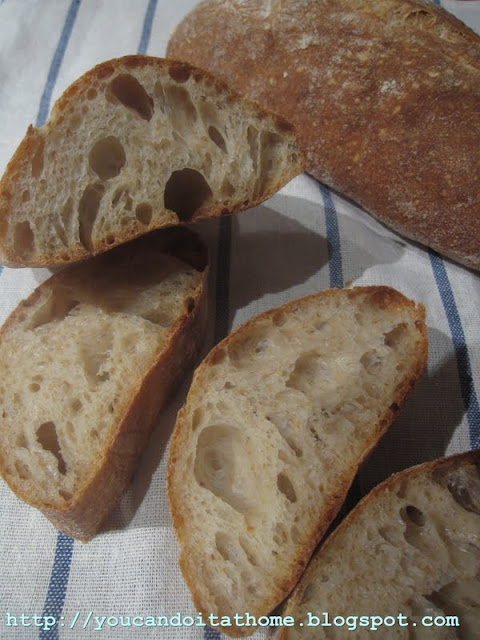 I have an obsession with wheat germ. I love its aroma and taste, especially when it is toasted and used for bread. I’m so obsessed that whenever I saw the recipe with wheat germs, I would jump to it.
Flipping through Bread cookbook

by Jeffrey Hamelman, I came across Ciabatta with wheat germ and olive oil. The recipe is in the pre-ferment dough section that deserves more attention than I gave to it (I generally bake more with sourdough starter, and less with yeast). The flavour profile sounded promising, wheat germ and olive oil with high hydration dough (high water percentage to flour).
This was the second time I made Ciabatta. The first time, I used recipe from Peter Reinhart’s Bread Baker’s Apprentice cookbook. Reinhart’s shaping method was rather different from others. He shaped the dough by folding it into three-fold, like a letter fold. From my understanding, one of the characteristics of Ciabatta is random large-holes, which requires gentle shaping to retain the air pockets. This would mean minimum shaping, if any. I did some more searches on the shaping and reconfirmed (from Susan@Wild Yeast’s video and Jeffrey Hamelman instruction) that ciabatta need no shaping at all. Instead, ciabatta dough is gently patted into big rectangular dough piece and cut into a long wide strip. The big strip is then placed onto heavy floured baker’s linen to proof. The purpose is to not deflate the dough and retain the air pocket produced during fermentation.

Note: It's now winter in Melbourne and sometimes, I baked or cooked at night, like this instances. Not enough lights and shadow in photos as a result :( 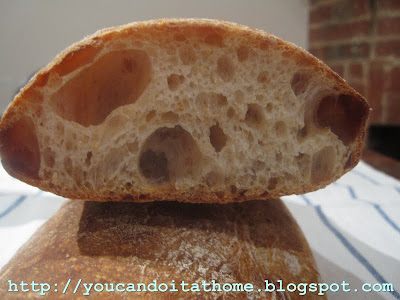 The dough was rather wet (with 72% hydration) so I decided to knead (by hand) in the bowl until the dough came together and do the stretch-and-fold in the bowl every half and hour for the first 2 hours (out of 3 hours fermentation). For me, this method always works well to give the dough proper gluten development for high hydration dough. When shaping Ciabatta, make sure the bench and baker’s linen are well (and heavy) floured to prevent any sticking and tearing surface. I used 100% cotton off-cut curtain pieces from IKEA for my homemade couche (baker’s linen). It worked well. The dough hold its shape and there was no issue of sticking. 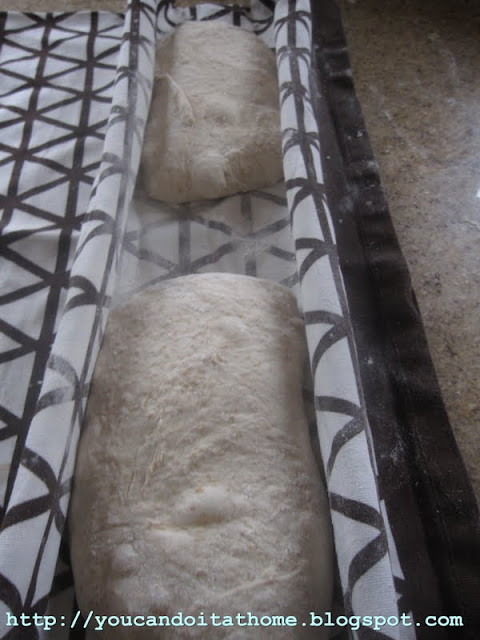 The bread tasted really good.  It was chewy, moist and crusty. Toasted wheat germs and olive oil added another dimensions to ciatbatta. The bread came out of the oven in a perfect timing for dinner. It was great with potato soup with sage burnt butter. The toasted wheat germs did that again. It gave such a nice flavour and aroma to the bread and my obsessions with wheat germs will continue.

For formula and recipe, you can visit this site here.
Ciabatta shaping video by Susan @ Wild Yeast can be found here.

Submitting this post to YeastSpotting
Posted by Sue at 12:03 AM