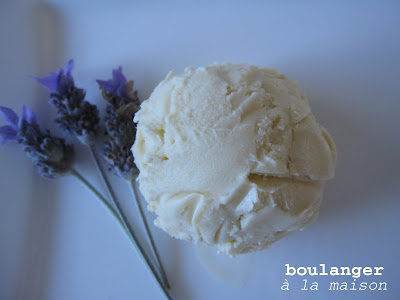 The first time I encountered lavender ice cream was several years ago when I was at a lavender farm in Adelaide with my friend and her cousin, A and P. P was having lavender ice cream and we were amazed that there was such a thing. He was trying hard to convince us that it was nice and encourage us to have a bite. We didn't even want to try as the idea of lavenderish dessert, or any lavender flavoured food for that matter, didn't sound appealing at all. It is perfumery, floral, I just thought that it was not going to work.

That was long time ago before I was into food and cooking. Now, things have turned, I love anything floral, be it rosewater, jasmine, orange blossom and of course, lavender.

I still have culinary (edible) lavender that J, my workmate, gave me. It is the last two precious tablespoons that I have and the lavender ice cream made with the new ice cream maker  would make a perfect choice.

The house smells wonderful when I was cooking the lavender cream for ice cream mixture. It was just something that makes me smile and feel relaxed. Lavender is also my favourite aroma. It was then like killing two birds with one stone making lavender ice cream. It was dessert making as well as an aromatherapy.

I also send this post to Weekend Herb Blogging which is hosted by Honest Vanilla.
Here is the recipe....

In the meantime, beat egg yolks with caster sugar at medium-high speed until it is pale, thick and creamy (the sugar will almost dissolve).
Pour the hot lavender cream mixture into the egg mixture and stir at low speed until well-combined.
Put the mixture back into the small saucepan and cook it over low-medium heat. Keep stirring the mixture until it coats the back of the spoon. It will take approximately 4-5 minutes.
﻿

Transfer the mixture to a bowl sitting on top of an ice bath (this is to cool down the mixture and to prevent egg become scramble as egg will continue to cook even though it is off the heat).
Note: I have tried skipping the ice bath and put the mixture straight into the fridge (NOT freezer)  I then wait until it is completely cool down before start the ice cream churning process.