When Christmas is just around the corner, one can’t help feeling festive and want to generate Christmas spirit all around. This is my first Christmas as a  bread enthusiast and I have my eyes on a couple of festive breads. One of them is stolen,  a festive German breads eaten during Chistmas time.  The bread symbolises the blanket of the baby Jesus, and the coloured fruits represent the gifts of the Magi. 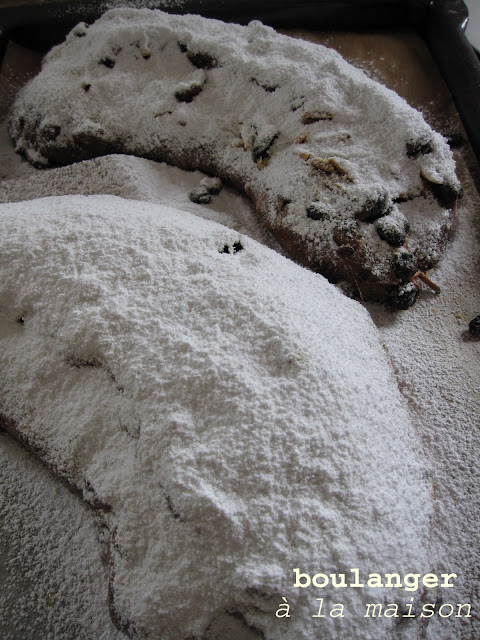 I think I only had stollen once. I bought a pre-package ones imported from Germany. It was quite sweet and dry, yet it was lovely, a very tasty bread.

I chose the recipe from Peter Reinhart’s  Bread Baker Apprentice: Mastering the arts of extraordinary breads. I changed parts of the recipes to suit what I have in the pantry (I am one of those who would try to find substitutes to recipes in my pantry instead of venturing out and buy new packs of ingredients). Some of the substitutes I had were using lemon and orange zests instead of orange/lemon extract, and using sherry instead of brandy (I know, I know, this is probably so untraditional, but let me tell you that it worked really well). I also used the pre-packaged dried fruit mix, instead of making my own fruit mix as the recipe suggested, and again it worked nicely.

I knead the dough by hand and knead it until the gluten was fully developed before adding the mixed fruit soaker. It would be almost impossible to develop the gluten further once you add fruit soaker.

The dough was very sticky when it is mixed with the fruit soaker. I had to put about 4 tablespoons of more flour in to adjust consistency of the dough. The texture was almost like a cake. The dough was still quite sticky even dough I added more flour. However, the liquid seemed to get absorbed during the fermentation and the dough wasn’t too hard to shape after all. 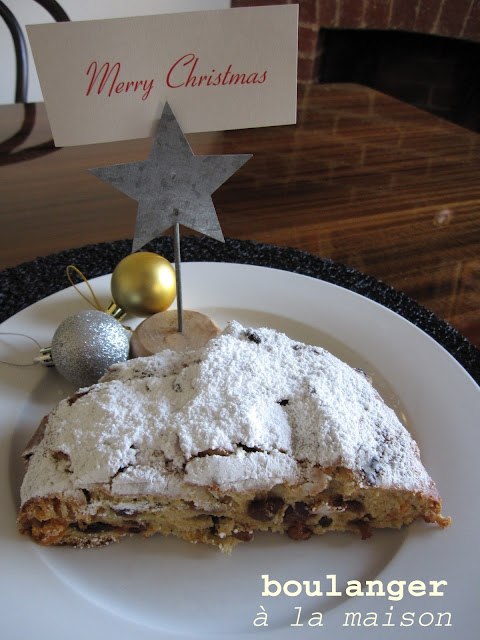 I had trouble shaping the loaves following Peter Reinhart's instruction. I determined to get it right...so, I made this again the weekend after (it's actually an excuse, I love the bread and want to have it again:)). I ended following Susan’s instructions on Wild Yeast Blog which is easier to follow and quite straight forwards, yet achieving the same result.

It is a very delicious bread, moist and aromatic.  We love them so much and finish one small loaf in a day, and the other a day after. I also bought a loaf from my second bake to work and my workmates love it too.  I sure will do this again and again. It's great bread all year round, not necessary for only christmas. I also think that the recipe could be good for hot cross buns as well. 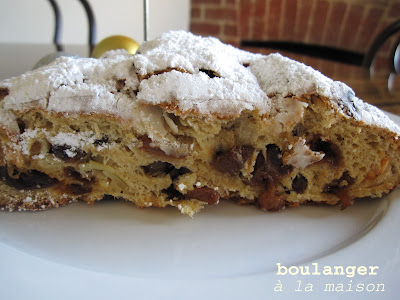 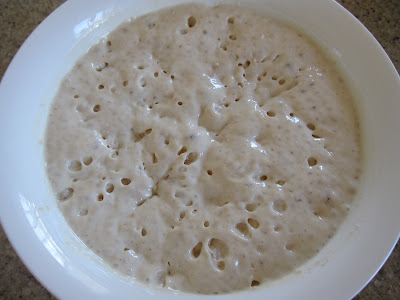 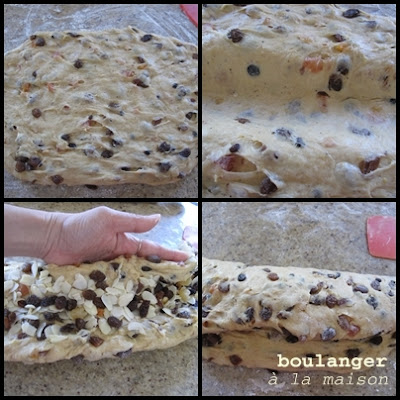