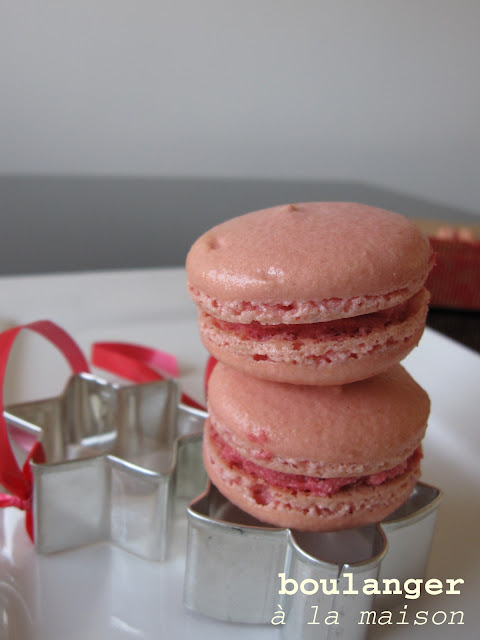 A continuation from my previous post of Christmas series macarons, Green: Dark Chocolate Mint Macarons, this week is ... as you might have guessed it...Red: Raspberry Buttercream Macaron. It would be a good idea to whip these two batches of Red and Green macarons together for Christmas party or gift. The colours are so festive and christmasey. 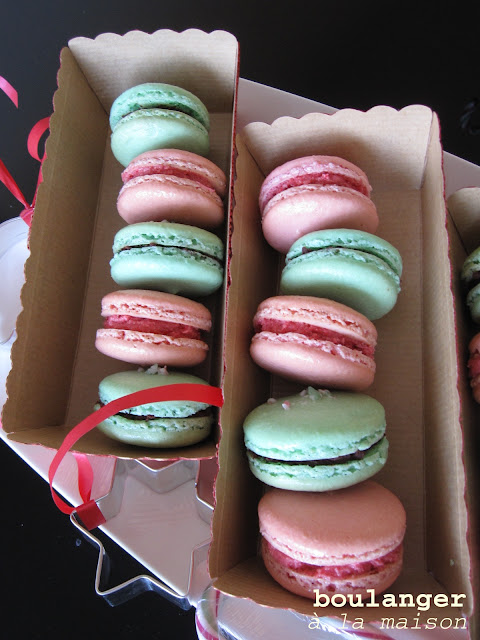 This is the first time I made French buttercream for macaron filling. French buttercream is a perfect way to use leftover egg yolks from making macaron shells (hence, I never made it as I never had any egg yolks leftover. I usually used those yolks for ice cream, custard and crème brulèe). French buttercream is egg yolk mixed with cooked sugar syrup and butter. It tastes quite rich and smooth. It is also versatile that you can mix other ingredients in to create your own flavours, lemon curd, jam, fruit puree, to name a few. 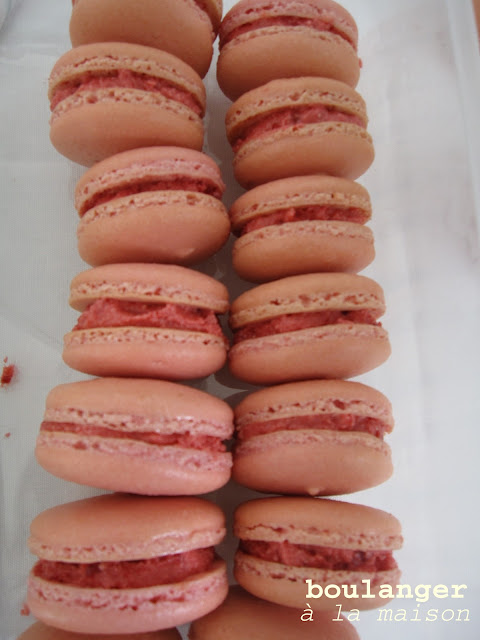 The raspberry macarons is now my most favourite. It's an OMG moment when I first bit into it. The taste is to die for. The raspberry must be a fruit from heaven or something, for pastry and sweet anyway. The flavour is just so intense. It is full of tang, rich aroma and rich colour. The flavour blends so perfectly with the rich buttercream and sweet meringue shells. It made my mouth watered thinking about the taste experience. It has so much depth in its flavour. 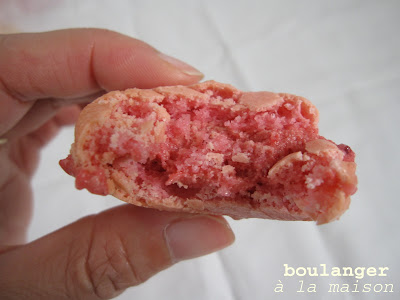 Com'on, let's get festive and whip up some red macarons!
Raspberry Buttercream Macarons


You can also see more detailed intructions on making macarons in my Basic Macaron Recipe and I heart Macarons blogs.
Macaron shell ingredients
100 g egg white (about 3 extra large eggs, aged 24- 48 hrs in advance. Take egg white out of the fridge a couple of hours before making to bring it to room temperature)
110 g almond meal (almond powder, ground almond)
160 g pure icing sugar (powder sugar)
60 g caster sugar (fine sugar)
a pinch of red colouring powder or liquid
Raspberry buttercream ingredients
3 large egg yolks, at room temperature
90 grams castor sugar (fine sugar)
90 grams butter ointment (soft butter, but not melting)
10 grams water
½ cup raspberry jam (I used a homemade jam in this recipe)
Making macaron shell
Sifting almond meal and icing sugar together by pushing them through a sieve. You can also grind almond meal and icing sugar together in a food processor to have finer almond meal mixture and it will be easier for sifting. However, this is not necessary.
If using colouring powder, mix it with caster sugar in a small bowl until you achieve the desired colour (note that the colour need to be much more intense than the desired end-result as the colour will fade once mixed with egg white and other dry ingredients)
Using electric mixer, beat egg white on a high speed until foamy, gradually add caster sugar, one tablespoon at a time. Continue beating the egg white until it reaches a glossy stiff peak. If using colouring liquid, put about 10 drops of green colouring liquid into the egg white mixture and mix on a low speed until well-combined.
Mix egg white into an almond meal mixture. Stir quite vigourously to break the egg white into dry ingredients for the first ten stokes or so. Continue to mix the egg white with dry ingredients until well combined (try the motion of lift, fold and push the mixture to the side of mixing bowl). The mixture should be thick, glossy and well-blended. The batter will look like a very thick cake batter.
Spoon the mixture into a piping bag fitted with a 1-cm plain nozzle (size #11).
Pipe mixture onto a tray lined with parchment paper or non-stick baking mat (Silpat) about one-inch in diameter and one inch apart.

Tap trays on a kitchen bench a few times to flatten the piped macarons and remove the air bubbles.
Leave the piped shell uncovered at room temperature for 30-60 mins until you can touch the shell without them sticking to your fingers.
Preheat the oven to 160c/180c (convection/conventional) about 15 mins before baking.
Reduce the temperature to 140c/160c (convection/conventional) and bake macarons for about 13-15 mins. Baking time will depend on the macaron size.
Remove baking trays from oven. Remove macarons from the tray and put them on cooling racks. You may need a serrated knife to help removing macarons. Spraying a little water onto the hot tray underneath the paper also help releasing macarons (the steam gives that magic releasing power).
Once they're completely cool, sandwich two shells together with raspberry buttercream. Keep the filled macarons in a covered container in the fridge. They can be kept upto 5 days (or longer). Macarons taste better after they have been chilled for at least 12 hours. Filled macarons can also be frozen.
Making raspberry buttercream
Make the butter oinment by wrapping the butter in plastic wrap and putting in the microwave for about 10 seconds. Use a rolling pin to roll over the wrapped butter and make it into a paste. Do not overwork the butter as you don't want it to turn to liquid. Set aside.

Mix the sugar with the water and bring to a boil. Using a candy thermometer to measure the sugar temperature, continue to boil until it reaches 121C (249F). If the sugar begins to crystallize on the sides of the pan, wash them down with a pastry brush dipped in the water or briefly cover the pan and let the steam dissolve the crystals naturally. 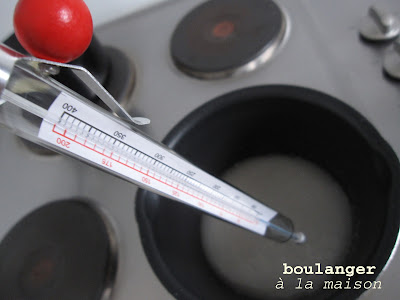 Meanwhile, whip egg yolks in electric mixer on medium high speed. They will begin to turn pale and yellow and will become light and thick.
When the sugar reach 121 C or 249 F, remove it from heat. With the mixer on high, slowly pour the syrup into the egg yolks in a thin stream between the whip and the sides of the bowl. Be careful not to splash the hot syrup, or your buttercream may from small sugar crystals in it. Return the mixer to medium high, and continue beating until the yolks are thick and fully cooled. 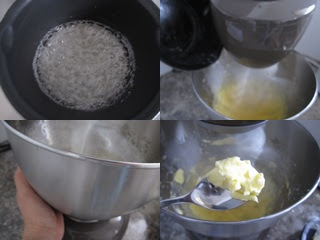 Reduced mixer speed to medium and gradually add small amount of butter ointment, but only as much as it can be absorbed into the mixture before adding the next amount. Continue to beat well until the buttercream is smooth. About 15 minutes. If you add the butter too quickly, the butter can melt and the mixture will turn to liquid.
As the buttercream solidifies, add raspberry jam, and beat for an additional minute. 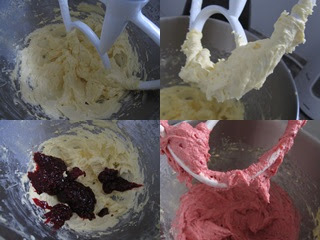 Chill the buttercream filling until ready to use.